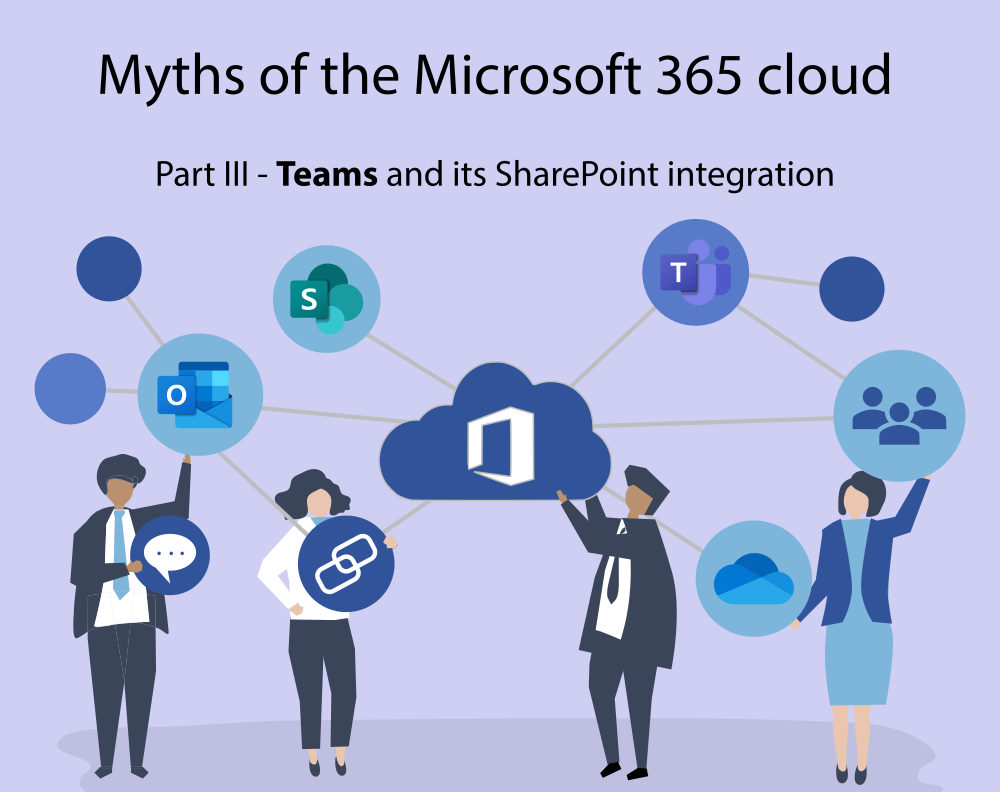 Teams is Microsoft’s communication platform that offers video meetings and text-based chats at work that happen in one or more team rooms. Learn how Teams integrates with SharePoint, how you can plan your team structure (including private channels), and discover several non-obvious features of the app.

Microsoft Teams is a cloud application, which you can access from a mobile or desktop app, or in the browser. Teams’ use cases are text-based chats, as well as video/audio-meetings. Your user account is part of one or more team entities, where each team has one or more channels, in which people can create text/image-based posts.

As I explained in part 1 of this series, the Teams application does not handle membership management itself, but uses a Microsoft 365 group for that purpose, which is created behind the scenes when you create a new team. In other words: each team in Teams has an associated group that handles its members, and if you add or remove members in the Teams app, this really affects the underlying group structure. When you create a team, the system not only creates that group, but also a new SharePoint site (see part 2), and adds the group to the site‘s list of members, which lets all users in the group access the site.

In this article I’ll discuss various aspects you should know about teams, including usage tips, how Teams integrates with SharePoint and whether you should use private channels.

When you use teams in your organization, you should plan to build a sensible structure of teams and channels. The problem you need to solve is: which (and how many) teams do I create (considering that membership management for each team requires effort) and how many channels (public or private) do I create, per team?

There are two basic settings you need to understand.

The official documentation recommends that the teams you create in the app should resemble your actual team structures in real life. For instance, you would have teams like “Accounting”, “HR”, or “Engineering”, reflecting your departments, but it could also mean to create teams for specific projects (where people spread across multiple departments work together).

You might wonder: when I need a restricted space, should I use a private channel, or create a new team? There is no definitive answer, but maybe the following considerations will help you:

Teams lets you integrate a number of SharePoint objects and make them accessible via tabs. These tabs are shown at the top of the Teams window, while you are in the Teams mode (not chat, etc.) and have a specific channel open. Each channel can have a different set of tabs. Note that this integration is one-way, that is, you cannot integrate Teams-content (e.g. chat messages) into SharePoint.

At the top of each channel, you not only see the Posts tab which shows the messages, but also the Files and Wiki tab.

If, in SharePoint, you click on Documents, you will see the list of all folders. In this case, you should see at least the folders General, foobar and Subtest, which correspond to the public channel names. Above, I explained why private channels are not listed at this point. Instead, their content is stored in a new, separate SharePoint site.

Adding integration-apps (as tab) yourself

To add a new tab to a specific channel, click the + icon while you are in that channel.

This opens a dialog similar to the one shown below. Not all of the shown apps actually embed content from a SharePoint site. Those which do are highlighted in red:

In other words: the following apps do not store content in SharePoint, but in some other place. They just associate content with your team/channel/group in some way: Forms, Tasks by Planner, Whiteboard, Stream, Power Apps, Power Automate (=Flow), Website.

Let’s look at those integrations that do embed SharePoint content:

Note: once you added a tab, you can rename it (click the arrow tip pointing down -> Rename), or rearrange its order (using the drag&drop mechanism). However, the Teams app enforces that the first two tabs are Posts and Files.

The following sections are a random collection of non-obvious features I learnt over the last year.

Typing emoticons: instead of always inserting emoticons using the menu shown in the image, you can simply type the emoticon’s name in parentheses, e.g. “(wink)”. Teams will automatically convert this text to the emoticon. To find out the available emoticon names, open the emoticon menu, then hover over the emoticon with your mouse pointer.

Use MarkDown for formatting: while typing, you can apply formatting (such as bold, italic or strikethrough), using the MarkDown syntax. For instance, “_some text_” will be converted to “some text” automatically. See here (official docs) for details about the syntax. This makes you faster compared to first typing the sentence as usual and then applying formatting afterwards, which involves clunkily moving around of your cursor.

Quote text: if you want to answer to a specific section of someone’s message, type the > character at the beginning of a line. This automatically creates a gray quotation block. Paste the content you want to quote, then press <enter> twice to leave the block.

Without the understanding of the groups concept, it is easy to misunderstand how Teams and SharePoint work together, or that Teams does not actually store any files. Now you know that things like document files, or lists, are actually stored in SharePoint, private channels get a separate SharePoint site, and how to reach these sites.

Take the opportunity to use your gained knowledge. See if the structure of your existing teams, including the private channels, still makes sense, given the limitations of private channels. This may involve cleaning up your document library structures.