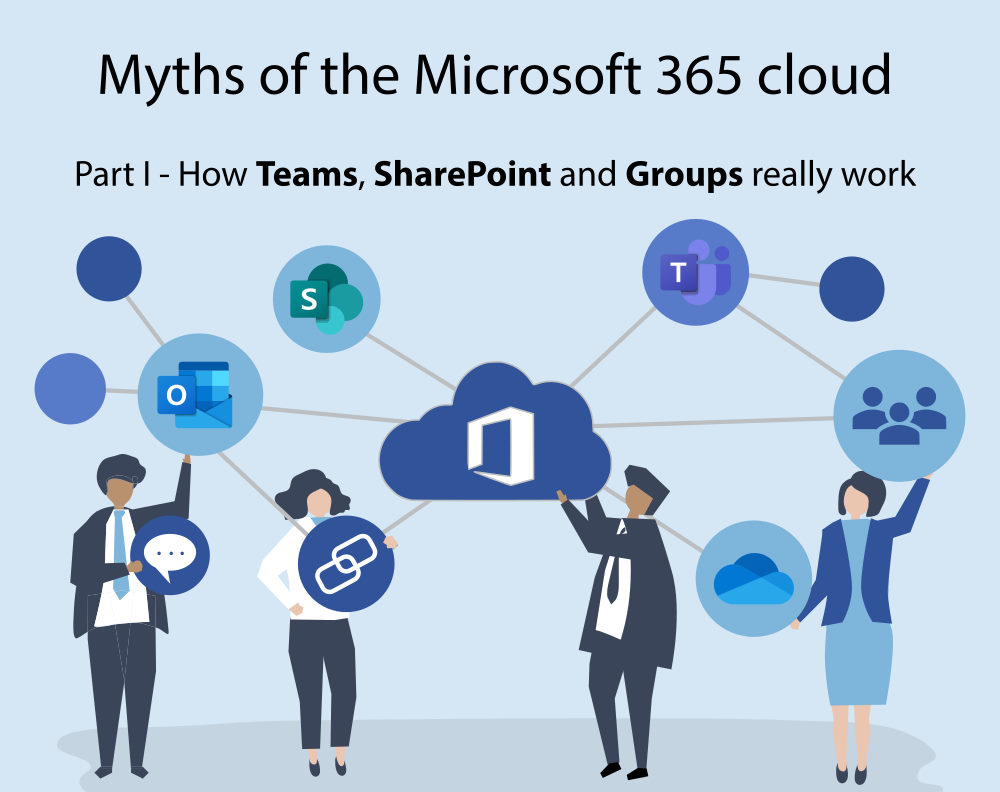 The Microsoft 365 cloud is a complex system with a large number of apps, such Teams or SharePoint. If you were introduced to the Microsoft 365 cloud without proper training, you likely misunderstood how the different apps integrate with each other, and believe in myths due to an incorrect mental model. This article explains the basic membership concepts, organization, user and group, how they back applications such as Teams or SharePoint, and what actually happens under the hood when creating a team or SharePoint site.

Whenever an organization introduces a new set of tools like the Microsoft 365 cloud with its applications Teams, SharePoint and Exchange, its employees easily get overwhelmed if there is no proper training. I’ve experienced it personally that I and my colleagues started randomly exploring the applications, building an incorrect mental model of how these applications work and interact with each other. Once you have gained a better understanding, however, fixing the structures (such as your teams, channels and SharePoint sites) is hard or often impossible, due to limitations of the Microsoft 365 cloud.

To avoid such problems, this article series presents a (simplified) mental model of how Teams, SharePoint and Microsoft 365 groups work and how they integrate with each other. If your organization also introduced the Microsoft 365 cloud with these tools, then this is for you! After reading this and my follow-up articles, you will no longer have misconceptions like “files I see in MS Teams are stored in Teams”. This article starts with explaining the most basic concepts, while the follow-up articles go into details about SharePoint, Teams and groups separately.

The following image illustrates the relationships:

These concepts are used by applications, such as:

When you create a new team in MS Teams, or a new SharePoint site, many things happen behind the scenes. This is the reason why many people misunderstand how Teams, SharePoint and groups work.

What happens when you create a Team

When you create a new team in the MS Teams app (by clicking the “Join or create team” button at the bottom left), the dialog will first ask you whether you want to create a team “From scratch”, or “From a group or team”. When you select “From scratch”, the following happens:

When you instead select “From a group or team” instead of “From scratch”, followed by selecting “Microsoft 365 group”, then only a new Teams team is created for the already-existent group, using your provided name, with a single channel named “General”.

What happens when you create a SharePoint site

When you open the SharePoint homepage and click the “+ Create site” button at the top left, you are asked to choose from one of following two templates: Team site or Communication site:

This article explains the differences. You cannot change the template later on, so you have to choose wisely:

What happens when you create a Group

When you open Outlook on the web, you can click the New group button at the bottom left to create a new group:

Understanding the basic membership-related components of the Microsoft 365 cloud greatly simplifies building a correct mental model of the remaining parts, such as the applications Teams and SharePoint. I go into more details for each application in the follow-up articles.