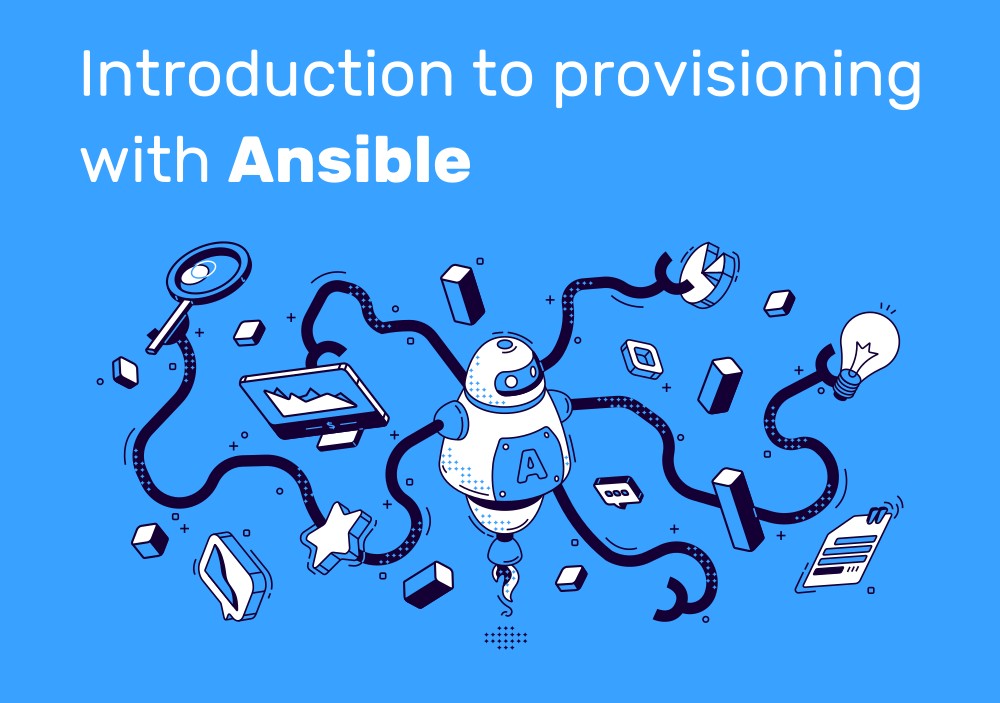 This Ansible introduction explains what Ansible is and how it works. I explain the most important concepts and demonstrate them by example. I go into common pitfalls, such as installing Ansible, handling secrets, or getting reproducible projects.

Ansible is a CLI tool that provisions other machines. Here, provisioning refers to installing and configuring software on other machines. A concrete example from the Linux world would be to install a Linux package via apt/yum, or to make sure that a systemd service exists and is started, or that specific files are present on the machine. Another frequently used term for provisioning tool is Configuration Management tool.

In general, provisioning machines means that you typically have many machines that shall be provisioned (let’s call them target machines), and one machine that knows the provisioning instructions, like a “recipe” (let’s call it the source machine).

Provisioning tools, such as Ansible, Salt or Puppet, apply either an agent-based or agentless approach. Ansible applies the agentless approach, where the source machine needs a technical way to directly connect to the target machines (e.g. via SSH or WinRM). The target machines need no specific agent pre-installed (but it does need a listening service, e.g. a SSH daemon, and a Python interpreter, see managed node in docs). In contrast, agent-based software, such as Puppet / Chef / Salt, requires that the target machines already have some kind of (software) agent installed, which maintains a persistent connection to the source machine, downloading provisioning-instructions, which the agent then applies to the very same target machine on which it is installed. Which approach is better depends on the circumstances, but the industry is moving towards favoring agentless tools like Ansible. Even though it can be challenging to establish the network connectivity, the advantage of not requiring any preinstalled software on the target machines makes agentless tools the clear winner.

Once you have to provision many machines, the only viable solution is some kind of automated scripting. It’s good practice to document such scripts and put them into version control, for better transparency in your team. However, you may wonder why using Ansible is better than, say, a hand-crafted Bash script that connects to all your servers via SSH and runs a set of commands?

Ansible has two main advantages over such hand-crafted solutions:

Ansible makes heavy use of YAML files. Therefore, you must acquire a solid working knowledge of the YAML file format. Otherwise, you will pull your hair over “weird errors”, or worse, there are no errors but Ansible does not behave the way you expect it to.

If any of the following things sound unfamiliar to you, you should definitely brush up your knowledge first, e.g. with an introductory guide such as this one (or the one by the Ansible team, see here):

While you are still learning (and assuming that you understand JSON syntax well), it can be helpful to test your knowledge, by converting files between JSON and YAML, e.g. using this online converter.

You should also be aware that Ansible has a lot of history using the INI format, due to its heavy use of Python’s ConfigParser module (docs). This leads to some extra “magic-looking” syntax which lets you insert INI-style key=value pairs into YAML, which are interpreted by Ansible. The following example demonstrates the concept:

I personally prefer the latter variant that uses “pure” YAML, and avoid the key=value shortcuts.

Ansible is a Python package (see the ansible package on PyPi), and therefore requires a Python interpreter on your machine. The installation is operating-system dependent:

A major caveat to be aware of is that you may accidentally install a very outdated Ansible version, without even realizing it!

Caveat #1: The command ansible --version (which you think you could use to verify whether you have the up-to-date Ansible version) does not show the version number you expect. The command ansible --version shows you the version of the ansible-core Python package, which has a completely different versioning scheme. The version you want to know (and which is also shown at the top left in the Ansible documentation menu, e.g. version 6) is the version of the ansible Python package, which is some kind of meta package that references other packages (such as ansible-core). You can determine its version via python3 -m pip show ansible

Caveat #2: The version that pip installs depends on the version of the Python interpreter. If your Linux distro comes with an older Python interpreter, such as Python 3.7, then pip will happily install an old, no-longer-maintained Ansible version, without warning you. Check the left sidebar of the ansible PyPi package (under “Programming language”) to see the list of currently supported Python interpreters. At the time of writing, this is Python 3.8 or newer. The exact Python version depends on the Ansible core version, see the Ansible docs here.

This also means that if you use WSL, you need to carefully choose your WSL distro. For instance, avoid Debian, which is known for shipping very old packages that are close to their “security-updates” expiry date (like Python 3.7).

Let’s look at a simple practical example which provisions two CentOS/RHEL Linux machines to become web servers, by installing and configuring an Apache2 server. You simply place these two files in a directory and trigger the provisioning via ansible-playbook --inventory inventory.yml playbook.yml

Let’s look at the concepts in these files in detail.

Now we need to understand the Ansible inventory, the first file shown above:

Ansible not only needs to know which target machines to connect to (defined in the inventory), but also how to authenticate against these target machines. Let’s assume you use SSH, which is the most common connection approach anyway. Ansible has multiple options to specify the authentication:

Example that illustrates host and group variables that configure authentication:

Often, there are “secrets” involved when provisioning a machine. For instance, suppose you want to provision a CI/CD build machine which includes installing a build-agent (e.g. a GitLab CI/CD runner, or Azure DevOps agent). This agent must be given an access token that it uses to connect to the CI/CD platform. You certainly don’t want to commit this secret token to your (Git) repository that stores your Ansible playbook.

To avoid leaking secrets, there are two basic approaches:

An Ansible role is simply a bundle of folders and files, arranged in a predefined directory structure. It consists of Ansible tasks and a few related files. The goal is to achieve better modularity for your playbooks. While you could get some level of modularity by using Ansible’s import or include mechanisms (e.g. on the task or playbook level), the main advantage of using a role is its predefined directory structure. The idea is that a role is a reusable artifact. In this context, “reusability” means that the role is very customizable (via input variables), and thus can be used by many kinds of project (that might need this customization). Typically, a role defines sane default values for most of these variables.

A typical example is the Docker Ansible role, which installs Docker Engine on your Linux machine. It comes with many input variables, but most of them have sane defaults. But you could, if necessary, customize the Docker engine’s version the role installs, the Docker daemon options, the package repository URL, and much more.

You can download hundreds of roles from Ansible Galaxy (details below), or create your own role, stored in the directory <project-root>/roles/<name-of-role>. The role’s predefined directory structure is documented here. Only the tasks/main.yml and the meta/main.yml files are necessary, the other folders and files are optional.

As documented here, calling a role can be achieved in various ways. You only specify the name of the role – there is no need to explicitly point Ansible to individual YAML files, such as tasks/main.yml. Thanks to the predefined directory structure that roles conform to, Ansible already (implicitly) knows where to look for these files.

Roles are a great concept. Unfortunately, for newcomers, the name “role” is horribly misleading, because it has nothing to do with “roles”, as in “role-based access control” etc.

Ansible Galaxy is a repository of reusable content, maintained and contributed to by the Ansible community. It is somewhat similar to repositories such as PyPi for Python, or NPM for Node.js. Ansible Galaxy manages two kinds of artifacts:

You can download and install roles or collections via a CLI tool:
ansible-galaxy [role|collection] install <artifact-namespace>.<artifact-name>[:<version>]

Alternatively, you can define an requirements.yml file that explicitly lists the roles and collections, as documented here, which is then used by ansible-galaxy install -r requirements.yml

Reproducible Ansible projects for your team

When working on professional projects, reproducibility is important: you want your playbooks to work, no matter who executes them, or where they are executed. In other words: you want to avoid phrases like “provisioning worked on my machine” at all costs! All the information Ansible uses should come from version control (except for secrets, of course).

If you don’t know the trick presented next, it is easy to run into all kinds of problems with Ansible: Ansible looks for roles, collections, or inventory in machine-specific folders, such as /etc/ansible. It is easy to see how this could wreak havoc. The content of /etc/ansible is not under version control, and if the user forgets to specify the path to the inventory file when calling ansible-playbook, they would provision the wrong machines (those defined in /etc/ansible/hosts). Or they might use an incorrect version of a role or plugin that they installed on their machine (for a different project).

To avoid such problems, add the following files to version control, to the same folder that also stores your playbook.yml file:

Contains your inventory, see above for details and examples.

provision.sh (or named similarly) is a simple Bash/etc. script that makes sure that your team won’t forget specifying the correct playbook file, or installing the required dependencies. Your project’s README should instruct your team to only use this script, rather than calling Ansible CLI-commands directly. Example:

When the user changes the working directory to the folder that contains playbook.yml and runs provision.sh, then Ansible will detect the ansible.cfg file, and use only this file (without merging it with any user-specific Ansible config from ~/.ansible.cfg or /etc/ansible/ansible.cfg.

Finally, you might want to ensure that the version of Ansible itself is pinned (or at least limited to some minimum version), to avoid negative side effects when users try to use too old (or new) Ansible versions. There are two approaches:

Ansible is a fantastic tool for provisioning machines. This Ansible introduction only explained the basics, but there are many more things you can do with Ansible, such as:

For further resources, consider the well-written official Ansible user guide, an awesome-ansible list, or the fantastic Ansible for DevOps book!