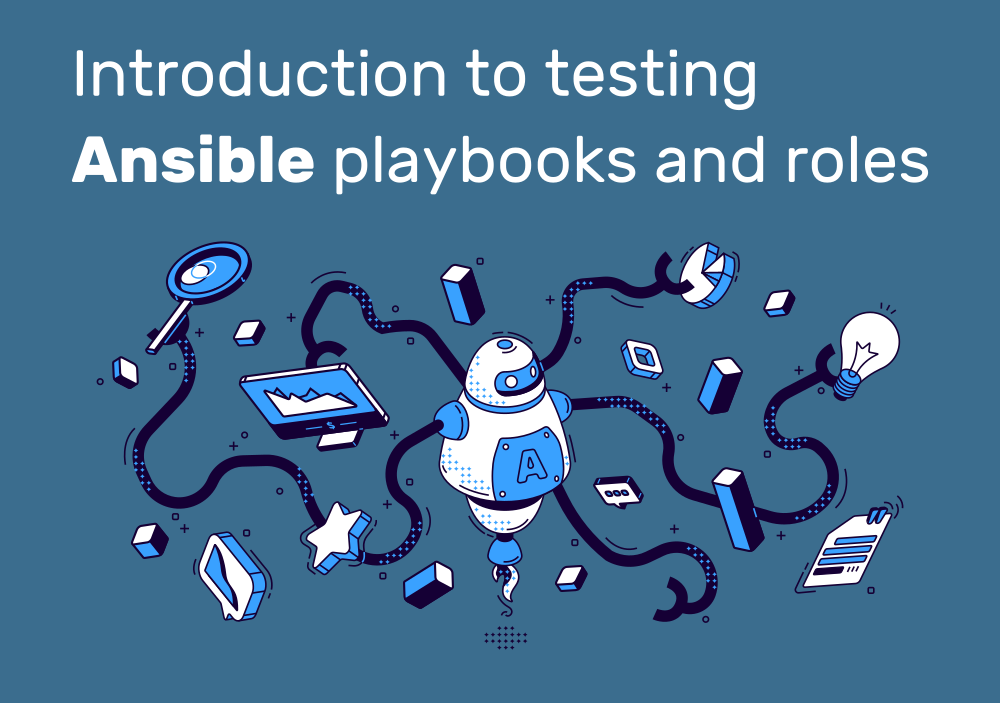 This article demonstrates how you can do infrastructure testing for Ansible roles and playbooks. I explain how the tools Vagrant and Molecule+Docker let you easily provision temporary VMs or Docker containers in which you can experimentally run your Ansible roles/playbooks, or even run unit testing in Continuous Integration.

Ansible is a CLI tool that provisions other machines. If you are new to Ansible, check out my introduction guide.

So the question is: what tooling can I use to write such kinds of tests, and how do I get testing-infrastructure set up easily (locally or in CI), to avoid that I need to use (real) hardware of my production system?

There are two tools at your disposal:

Vagrant is a CLI tool that uses recipes (a Vagrantfile) to download, start and provision VMs. See Vagrant introduction and use cases to learn more about Vagrant and how to use it. The basic idea is that with the right Vagrantfile, all you need to do is to run “vagrant up“, and a few minutes later you have one (or more) VMs with a naked Linux distro installed, which you can then provision with Ansible.

There are two approaches to integrate Vagrant with Ansible:

While the Molecule docs focus on describing how to test Ansible roles, you can also test complete playbooks, described next.

To get started, you need to install the Python packages for Molecule and Docker, e.g. via pip3 install molecule[docker]

In your project directory (where your playbook.yml is stored), run molecule init scenario to create a new “molecule” folder.

Open the molecule/default/converge.yml file and make it look like this:

Next, we have to change the molecule/default/molecule.yml file. The platforms section of that file defines which Docker container(s) to spin up. You could have multiple entries there, which tells Molecule to spin up a container for each defined image, and run your playbook inside it.

Here is an example:

There is one big caveat: your playbook will most likely use Ansible modules/roles that ensure that some Linux service is started (or restart one or more services). This requires a working init system (e.g. upstart, systemd, …). Normally, Docker images do not contain an init system, because init sytems require a very high degree of Linux privileges, which containers (by default) should not be given. But here we do need an init system, which is why privileged: true is set in the above file. We also need a Docker image that contains an init system. See here for a list of available images maintained by a very active Ansible community member, Jeff Geerling. On that page, scroll down to the “Container Images for Ansible Testing” section, and check the Maintained column, to find which images are (still) actively maintained.

If you are on Windows and use WSL2, you cannot use Docker-containers that internally use systemd, because the WSL2-environment itself does not come with systemd. You need a “host” OS with properly-working systemd, as it seems. You can achieve this with a Hyper-V or Virtualbox VM on Windows, into which you install Docker, Ansible and Molecule.

You can now use the following commands (make sure the working directory of your terminal is the project root):

There are quite a few more commands, see docs. You can deduce what these commands do in detail, by looking at the scenario-default list here.

If you want to know how to run molecule in CI (GitHub Actions), see here.

The presented tooling, Vagrant and Molecule, improve the life of an automation engineer significantly. During the experimentation phase, where you still figure out the structure of the role or playbook, you can now work faster and save money, because you don’t need to pay for real hardware, nor wait for the provisioning of virtual hardware. In addition, Molecule’s ability to run in CI and to write unit/system tests (as you know them from software testing) improves the infrastructure code quality, and catches problems early.