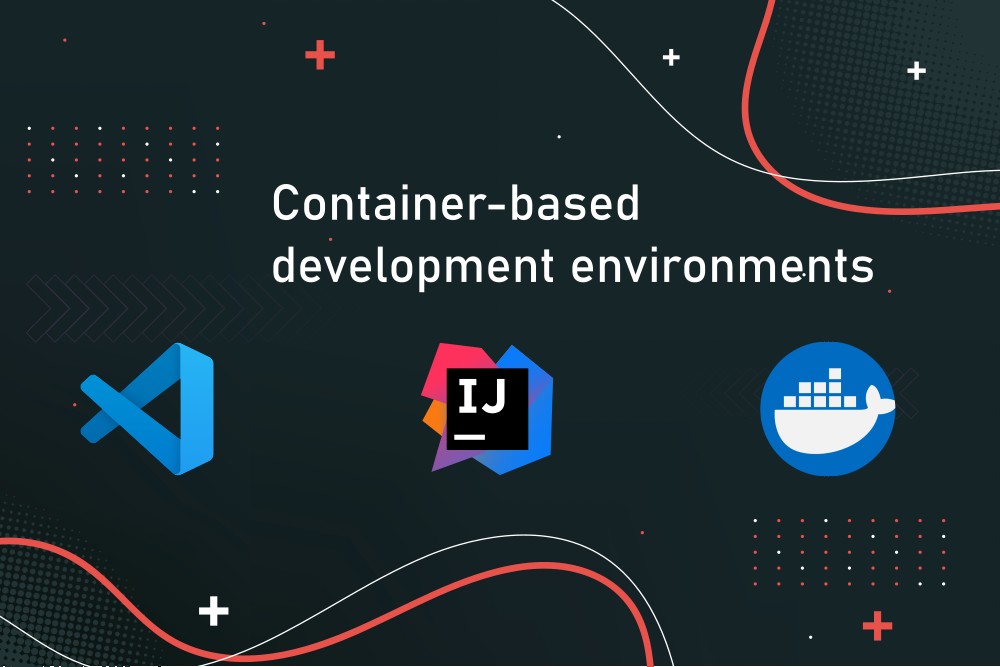 In this article I discuss container-based development, where you not only run but also develop and debug software inside a locally-running Docker container. I explain the advantages and disadvantages of this approach, and look at VS Code’s development container feature, various features of IntelliJ-based IDEs, and how to implement an IDE-independent approach.

For many years, developers have been developing “natively” on their host machine. They install compilers, language runtimes and frameworks on their machine directly, and use the tight integration of their IDE for things like code-completion or debugging (with break points).

I still observe this today, and found that this kind of native development causes several problems in practice:

Recently, the shift to (Docker) containers and images happened, not only in production, but also in the development phase of the SDLC. Container-based development environments aim to solve these problems, by developing inside a (Docker) container that is very similar to the production environment, which is (presumably) also running in a Docker/OCI container. There are many different ways of doing container-based development, and the different IDEs out there support it to different degrees. These are possible approaches I identified:

In this article I explain the last variant: running local development environments in a Docker container. The main points of this article are:

If you tried container-based development containers a while ago and discarded this approach, e.g. because of bad runtime performance (compared to using a native runtime installed on your host), or because of a complicated debugger setup: do not worry, things have changed and are now much better than a few years ago.

There are also a few disadvantages:

Approach #2 is done by the Docker integration feature of the IntelliJ platform. I take a look at this further below.

You could simply follow the official VS Code tutorials (see this one) to add a development container to your project, but I have a few tricks that you should definitely keep in mind.

Tip 1: Use your own Dockerfile

Microsoft advertises that you use Microsoft’s devcontainer images (images starting with mcr.microsoft.com/devcontainers/...). These are the images referenced by the Dockerfile that VS Code creates if you use its “Dev Containers: Add Dev Container Configuration Files…” function, and these are also used in all of Microsoft’s sample projects for the development container feature.

I highly recommend that you do not use these images!

Why? Because Microsoft’s pre-built images have two disadvantages:

Instead, I recommend that you use your own Dockerfile, design it as a multi-stage image, and simply add a dedicated stage for VS Code. Your Dockerfile could look like this:

In your devcontainer.json file, you also have to reference the stage:

Note: inside a development container, VS Code should automatically make your Git credentials (configured on the host) available inside the container. If this does not work out of the box, see here for help.

Tip 2: On Windows, clone the code to WSL

On Windows, instead of cloning your project to the Windows host file system (“C:\…” or similar), you should clone it to the Linux-native file system of a WSL Linux distro. There are two reasons:

You can install WSL2 and a Ubuntu WSL2 distro as officially documented here (wsl --install). Once installed:

To open the code stored in your WSL-distro’s file system from Windows (and from VS Code), use the path \\wsl$\distroname, e.g. \\wsl$\Ubuntu-22.04 – which acts as network share.

Make sure to document these steps for your developers!

When VS Code starts the development container, it sets up a bind mount that mounts your entire project directory into the development container. If you work on macOS, or on Windows and ignore tip #2 for some reason, you should be aware that Docker’s bind mounting mechanism is slow on these platforms, because here bind-mounting actually copies the files between your Windows/macOS file system and the Linux-based file system internally used by the Docker engine (on Windows, Docker Desktop sets up its own WSL distro, on macOS it sets up a Linux VM with HyperKit). The impact on performance can be massive, if the folder is large (measured in bytes) or contains many files. A typical example is the node_modules folder for Node.js-based applications, which can easily contain tens of thousands of files and have a size of several hundred MBs.

To overcome this problem, you can set up a dedicated Docker volume for these large folders, and set up a bind mount for these folders. Docker volumes exist in Docker’s Linux environment and thus offer fast reading and writing speed. Let’s see how to do this for the node_modules folder:

You can read more about this trick here. You can choose the volume name (here: my-frontend-node_modules) freely. If you have several such folders, simply add multiple entries to the mounts array.

Note that this volume-bind-mount trick has the effect that the respective folders inside the container and your host are completely independent of each other: they are no longer kept in sync!

Another tip: if you suspect that some application is running much slower in the development container (compared to the native performance on the host) due to file system activity, see here for how to start the application and trace what it is doing on the file system.

I have built an example application made up of an Angular frontend and a Spring Boot (Gradle with Kotlin DSL) backend application that demonstrates the concepts and includes the 3 tips above. Feel free to take a look at it. There I also address issues related to file system ownership: if you use Linux as host (or Windows with WSL2), you need to take care that the file ownerships of the files on the host are matching with the ones inside the container. If you don’t address this, it could happen that files you create in VS Code inside the container are created as root user, and they are also owned by root on the host, which is not what you’d want. If the base image you use already has an unprivileged user (as is e.g. the case for the node image), then VS Code has some automated mechanism where it creates another image layer in which it bends the user and group ID of that user to match the user/group ID of your host user. You can search the internet for “updateRemoteUserUID” to learn more about this feature. However, if your image does not have such a user, you can create one, as explained here.

Reviewing features in a development container

Another interesting use case for VS Code’s development container feature is the ability to clone any Git repository directly into a new development container, without cloning it to the host first. See here for details. This is useful to quickly review and test a feature branch of your project in isolation, so that it does not affect your already-in-use development container. It basically avoids that you need to interrupt your work in your repository’s main working tree (e.g. via “git stash“).

However, if you use tip #3 mentioned above, the isolation is somewhat limited. For instance, if you have a Node.js application (for which node_modules is mounted into a separate Docker volume) and the feature branch changes the package.json file, your node_modules Docker volume will be modified by the feature branch’s dev-container, which affects your main development container, too! In this case, you are better off not using this feature.

IntelliJ-based IDEs have two ways of supporting local, Docker-based development containers. I present each one in the next two subsections.

The traditional IntelliJ-based IDEs, such as PyCharm, WebStorm or IDEA, all have the same basic level of Docker support: once you configured the Docker daemon (or Docker Desktop) in the IntelliJ settings dialog, you can create Run configurations that run or build Docker containers/images (or docker-compose stacks). You can use the Services tab at the bottom of the window to see a GUI that shows running Docker (-compose) containers, and lets you control them.

In addition, some of the IDEs have a deeper level of integration, that is specific to that IDE and its primarily-supported programming language runtime. The integration is of varying quality. Let’s look at a few examples:

Conceptually, you can simply run a local Docker container (instead of a full-blown Linux machine) with a SSH server and use it as “remote” Linux machine in the Gateway client. There are scripts and projects such as this one or this one to get you started. Of course you have to modify these examples so that they use the base image of your application. And you should keep your code on the host, mounting it into the container.

The main problem I had when trying it out: it did not work, not at all. After configuring the remote SSH host, port and username/password, and selecting the remote IDE to install, the Gateway window would simply close, not showing any error message whatsoever. I sifted through the logs, but did not find anything that indicates the root cause. And even if it had worked, from what I read the stability of Gateway is not really great. Also, your Docker image would have to include many dependencies you would normally not want in your (production) image, such as the SSH daemon. Gateway is not a solution for M1-based macs either, because Docker then runs ARM64 Docker images, but the IntelliJ remote server is only compiled for Intel-based CPUs.

Motivated by the fact that I love container-based development and JetBrains IDEs, but their IDEs lack proper Docker-integration for many programming languages, I figured out a generic approach that works for any language and IDE, assuming that the language runtime (and IDE) supports remote debugging (typically via a TCP port).

The workflow is that the developer starts a Docker container, and can then develop “inside” the container by simply changing files on their host (in the host IDE). Your application’s source code is on the host, bind-mounted into the container. Inside the container, there is some mechanism that detects these code changes, hot-reloads the code, and lets the developer connect to a debug port.

The main caveats of this approach are:

To see how to achieve this, take a look at the example application repository that contains an Angular frontend and a Spring Boot (Gradle with Kotlin DSL) backend application. The following files are important:

In your project’s README, you should document how developers can get started. For instance:

To get a local, container-based development environment up and running, VS Code offers the most streamlined experience. However, if you dislike VS Code, for whatever reason (features, look & feel, etc.), you can either use my approach presented above, or (if you have enough RAM) use VS Code and your preferred IDE in parallel: edit the code in your preferred IDE, but run and debug it in VS Code’s development container mode.

If you like the idea of container-based development environments, but dislike the aspect of running containers locally, check out solutions such as GitPod, GitHub CodeSpaces or JetBrains Space. If you are a fan of JetBrains products, check out Fleet, which is their new IDE, currently in public preview. It is architected in a distributed way, and supports local as well as remote container-based development environments natively. However, regarding its feature set, it is not yet on par with the more mature IntelliJ-based IDEs yet.

If you liked this post and want to read another perspective about the topic, check out this excellent CodeCentric blog post.

Have you been using container-based development environments in your projects? What has your experience been? Let’s discuss it in the comments!