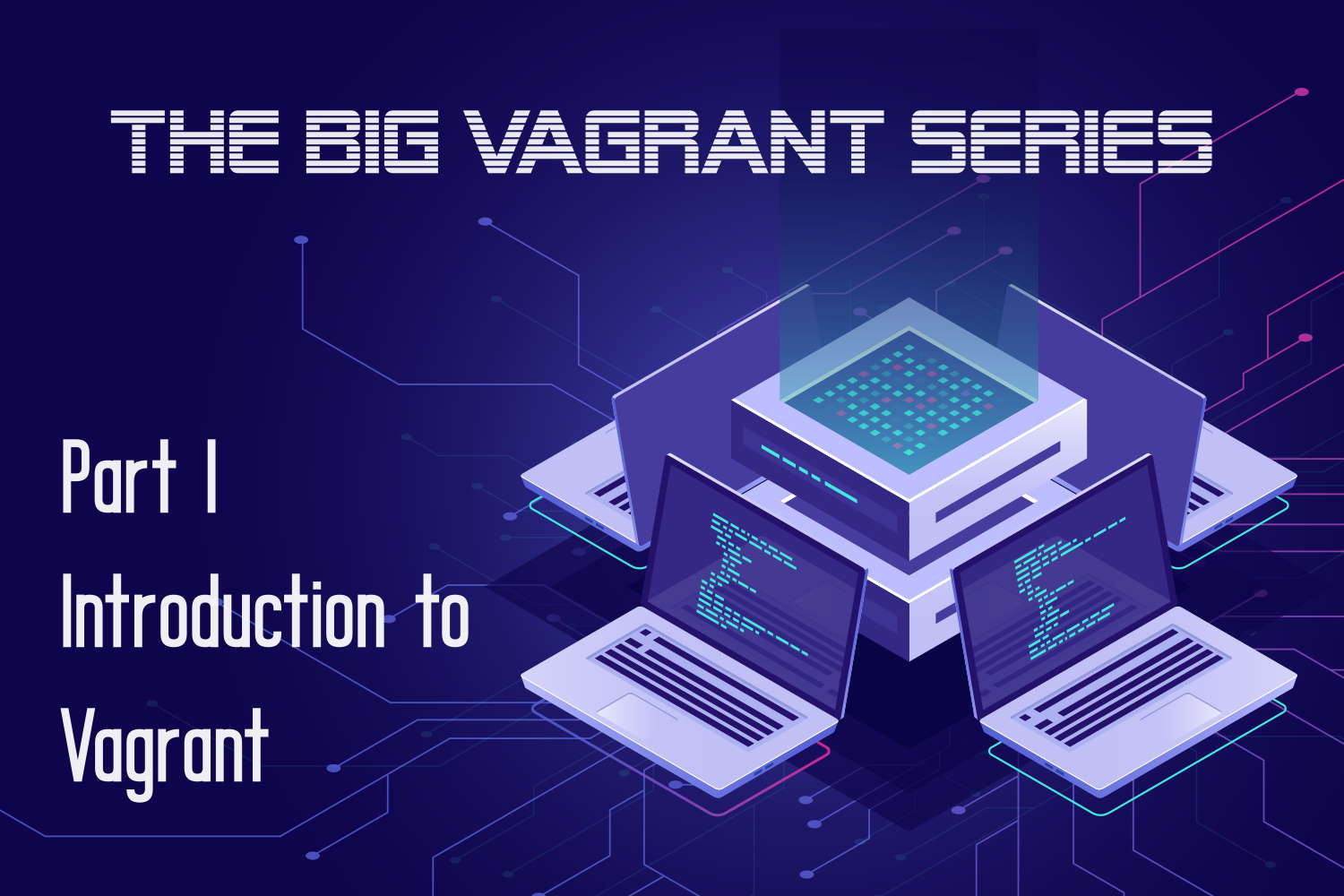 Vagrant is a tool that automatically downloads and configures virtual machines, according to a recipe file. It is similar to Docker, but with extended support for different, virtualized operating systems. Use cases include setting up virtual test beds, or CI build machines. This article provides an introduction to Vagrant’s concepts and how it works, as well as many tips and tricks for advanced users.

Vagrant is a free and open-source tool for Windows, Linux and macOS that manages virtual machines (VMs) and the software installed into them. It is comparable to Docker, in particular to docker-compose. With Docker, images are typically software bundles that you run on Linux – either natively or inside a VM. In contrast, Vagrant images are (almost) always run in a VM, and several hypervisors (such as Virtualbox, VMWare, Hyper-V, …) are supported. Consequently, Vagrant is truly cross-platform.

You can also think of Vagrant as an automation tool for creating and setting up VMs. All you need to do is write a recipe file (the Vagrantfile, more details below) and distribute it somehow, e.g. via Git, email, etc. The recipient only needs to run one command and a few minutes later, they have a configured VM ready to work with.

You might wonder what you need a tool like Vagrant for, so here are a few examples:

Before I’ll go into the details, I’d like to define a few terms from the Vagrant world:

Vagrant’s promise is to boost your efficiency when it comes to creating and configuring virtual appliances. The Vagrantfile offers a ton of configuration options, most of which are independent of the concrete provider you are using (such as VirtualBox). This makes it easy to switch from one provider to another, if need be. Here is an excerpt of a few notable configuration options you can place in a Vagrantfile:

Vagrant’s functionality does not end here. There is a large number of plug-ins you should check out, once you are familiar with the basics.

First, I recommend you use Vagrant with a local hypervisor as provider. This means that you’ll have to install one, such as VirtualBox (available on all platforms), or Hyper-V (Windows 8.1 or 10 Pro, see here for installation instructions). To use Vagrant with VMware (Fusion or Workstation), you’ll have to pay, not only for the VMware product itself, but also for the Vagrant VMware plug-in. Thus, VMware might not be your first choice.

Find a base box

After you downloaded and installed Vagrant, you need to determine the globally unique name for the box that you want to instantiate your VM from. To do this, go to the Vagrant Cloud and search for an operating system of your choice. Make sure to filter your search according to your provider / hypervisor. If you go to the details page of a box, you’ll see how to get started. What’s important to understand is that Vagrant creates and boots your VM with the vagrant up command, which expects that it is run in a directory that contains a Vagrantfile. You have two options to create this file:

More advanced users would now make changes to the Vagrantfile to set further configuration options, such as the config.vm options documented here. You may want to skip this if you’re still new to Vagrant.

To start the VM, just use the terminal (command prompt on Windows), switch to the directory that contains the Vagrantfile and run vagrant up

Let’s take a look at the magic that happens under the hood:

The above steps may vary, depending on the environment. For instance, if Vagrant already has the box cached, step 1 is skipped. Similarly, the VM only needs to be created if you run vagrant up for the very first time, or if you just destroyed the VM. Vagrant will also skip the last step in case it detects that the VM is already running.

How you use the VM depends on the VM’s OS. With vagrant ssh you will get SSH access to Linux or UNIX-based systems, like macOS. A convention in the Vagrant community is that every box should have a user named “vagrant” with password “vagrant”. For Windows-based VMs there is vagrant powershell, vagrant rdp (Remote desktop), and directly accessing the VM graphically. To achieve the latter with VirtualBox, just open the VirtualBox application, find the currently running VM and click the Show button to show the window.

Stop and destroy the VM

To just shut down the VM, use vagrant halt. Vagrant will try to gracefully terminate the VM first, by sending a shutdown-signal into the VM, waiting for the VM to react. If it does not react after some time, it will be forcefully shut down.

Whenever I create a new VM with Vagrant, I take the following Vagrantfile template and adapt it to my needs:

Of course there are many more options you should check out here.

If you choose Hyper-V as provider, I highly recommend you carefully read this article for further information. If you use VirtualBox, then you should know that there are many more customization options available. An entry like

tells VirtualBox to use the VBoxManage command, which has tons of other parameters – see the official VBox docs. For instance, you could activate traffic shaping (only affecting upload direction) to 1 mbps (as documented here) using these commands:

However, be careful with these commands, as they may change over time for different VirtualBox major versions (e.g. 5 to 6)!

In the Start the VM section I mentioned that before your Vagrantfile is loaded, Vagrant will load the box‘s Vagrantfile first (official documentation). The box’s Vagrantfile may have several default settings you might not be aware of. To see its content, find the Vagrant Home folder (see here), go into the “boxes” directory, and follow the correct sub-directory corresponding to the box’s name.

Another important detail is that vagrant up will re-apply most configuration settings (e.g. forwarded ports) from your Vagrantfile on every start. However, provisioning statements are an exception: they are only applied on the first VM boot. This page describes which CLI arguments exist to enforce provisioning anyway. You can also override this behavior from within your Vagrantfile by specifying the run: "always" flag. See here for more details.

As documented here, Vagrant makes it easy to set up shared folders. Most of the time, though, you don’t need to configure anything. Most boxes come with a synced folder already set up, which maps the host directory that contains your Vagrantfile to /vagrant or (or C:\vagrant on Windows) in the VM.

Synced folders have various configuration options and alternative drivers, such as NFS, SMB or rsync. They all have different pros and cons, most notably performance, space-consumption (some consume disk space in the host and guest, some only on the host), or availability (e.g. NFS won’t work on Windows hosts). Personally, I never changed any settings, because performance was not an issue for me. If you have such kinds of issues, consult the Vagrant docs for alternatives.

If you use more than one VM based on the same box, use linked clones to reduce disk usage.

Vagrant has a lot of commands. In the spirit of my previous How to boost development productivity article I highly recommend you read through the commands listed on the official docs and create your own cheat sheet. You’ll be delighted once you find out what commands like vagrant suspend or vagrant snapshot can do for you.

When using Windows VMs (with Vagrant or otherwise), you need to be aware of licensing and trial periods. Windows licenses are not free. Therefore, Windows boxes you’ll download from Vagrant Cloud are built using evaluation versions. These are time-limited, typically to 90 days, measured from the date the box was built (not: from when you start your “fresh” VM). Once that evaluation period has expired, the VM will still boot, but it will automatically shut down after a few minutes.

You’ll find an indication of how many days are left, by looking at the bottom right corner on the Windows VM’s desktop. Chances are that this number is small (or the license has already expired) right on the first boot, simply because the box may have been built and uploaded several days, months or even years in the past. Fortunately, Windows evaluation periods can be renewed up to 3 times. Each renewal resets the counter to 90 days. To renew the evaluation period, open a command line with administrator privileges, and type slmgr.vbs -rearm which triggers a confirmation dialog. Reboot the machine. It might take 1-2 minutes after the reboot has completed for the counter to update (the one shown on the desktop). You can add the following block to your Vagrantfile near the top, which performs exactly this step:

In rare cases, you may even have to reboot the VM a second time (without re-running the rearm command). I’ve also observed that, in some cases (e.g. for Windows 7), the counter did update, but to a very short trial period of 7 days. In this case, activating Windows will do the trick. Simply open Windows’ start menu, type “activate” and select the entry to activate Windows. Once activated, the counter increases from 7 to 90 days.

As I mentioned above, Vagrant can be extended by many different plug-ins. Here are a few of my personal highlights:

If you fancy graphical frontends, then take a look at Vagrant Manager, which is Vagrant GUI for macOS. I did not find a similar tool for other OSes, though.

If you work with VMs on a regular basis, Vagrant is a huge time-saver. Downloading virtual disk images is a thing of the past, thanks to the Vagrant Cloud which hosts thousands of boxes. Installing additional software is also done quickly, with Vagrant’s support for various provisioners like Chef or Docker. Vagrant is easy to learn, so pick it up if its functionality sounds useful to you.