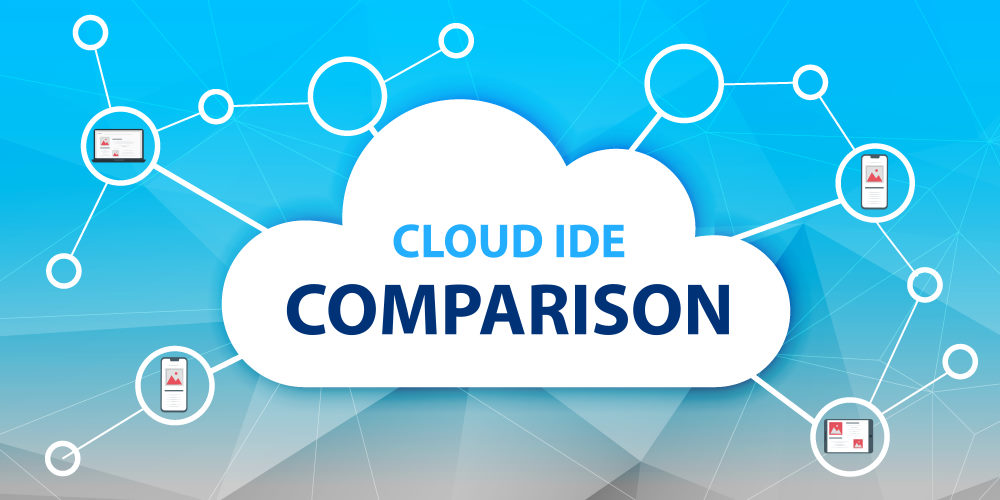 A Cloud IDE provides a complete development environment running on a server in the cloud, instead of you running it on your developer workstation. In this article I will discuss general advantages and disadvantages of Cloud IDEs, provide a Cloud IDE comparison of the best 9 IDEs I found, and give recommendations on how to select the one that suits your needs best.

As an engineer building software, you typically won’t start from scratch and write Assembly code. Instead, you will reuse existing technologies, selecting one or more programming languages, with additional frameworks and libraries to make your life easier. You also have to choose tools to package and distribute your application, and how to operate it on your servers (e.g. with Docker or Kubernetes).

This plethora of tools cause a problem during development: to actually get a working development environment up and running, a developer needs to download, install and configure a lot of tools (like compilers, IDEs, frameworks, etc.), and run several scripts in the right order. In other words: the on-boarding process is slow, ranging from hours to days. And whenever there is a change in the tooling or its configuration, all developers have to spend time updating their workstation.

In this article, I’ll discuss Cloud IDEs like GitPod and many others, which solve this problem. The basic idea is that all the tooling, and sometimes even the code editor, runs on servers in the cloud, being accessible via the browser. Developers don’t need to install anything locally anymore, because the entire tech stack runs on the server. There is typically a configuration template file that defines how a new workspace instance needs to be configured, with details such as a base Docker image, additional installation of libraries, build configurations and code editor customizations. These files may even be part of the VCS (Version Control System), and a concrete example would be a .gitpod file such as this one.

Advantages and disadvantages of Cloud IDEs

Cloud IDEs have a number of advantages, but also a few problems.

Finally, Cloud IDEs make it possible to audit your developers, which may be an advantage or disadvantage, depending on your view point. If a developer uses a local workstation (the “traditional” setup), organizations only see when the developer committed or pushed something to the VCS. But with a Cloud IDE, an organization can track its developers’ activities down to the smallest detail, as potentially every key stroke and mouse click may be recorded. On the one hand, this is creepy and may violate your rights, on the other hand this makes it possible to track how long the development of certain features took.

The following table compares the best general-purpose Cloud IDEs I could find in 2021:

Not optimized for mobile

The following table is not optimized for mobile devices! It contains a lot of data (columns & rows), so you should at least use a tablet to get anything out of it!

Cloud IDEs have many advantages, such as being able to quickly spin up new, reproducible workspaces and collaborating with them. You will probably still wonder: should I use them at all, and if so, which one?

My train of thought here is this:

In the end, even if you find that the Cloud IDE adoption had too many disadvantages, you can still go back to your previous setup, thanks to the flexible pricing models of Cloud IDEs. If your team finds that the main advantage of Cloud IDEs for them was real-time collaboration, consider my other article about collaborative code editors.

Did I miss any Cloud IDE, or do you know of any additional advantages or disadvantages? Let me know in the comments!