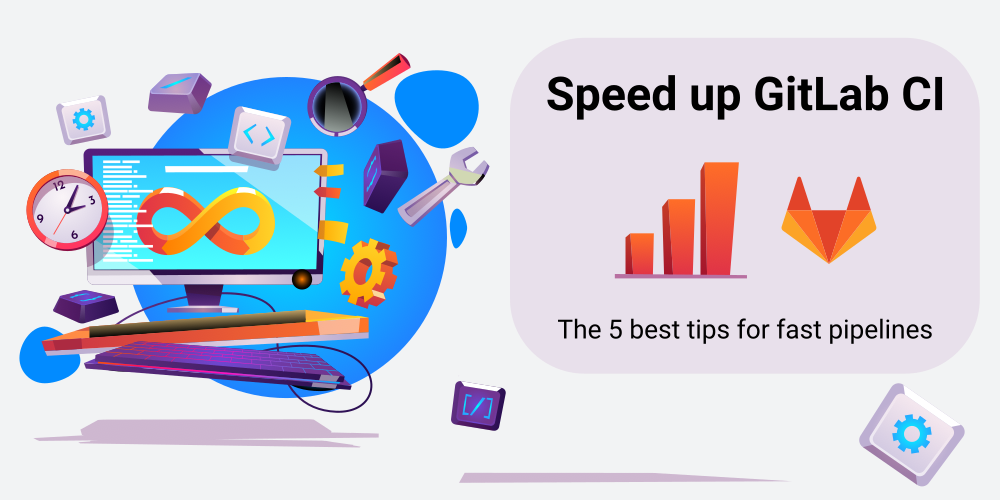 Starting from an overview of frequent causes for slow pipelines, I derive 5 tips to speed up GitLab CI pipelines. These include choosing the appropriate runner infrastructure, choosing the right caching approach (Docker vs. GitLab), DAG pipelines, mixing GitLab’s caches and artifacts, and optimizing individual jobs (e.g. via parallelization).

As I already explained in the CI/CD Basics article, the core idea of CI/CD is to save you money when developing software, by automating tasks, such as building, testing or packaging your application. However, if your pipelines are slow and take, say, 15 minutes or longer, your productivity as developer is negatively affected. You have to wait for the pipeline to finish before you can really declare a current work item as “done”, which might happen by merging a feature branch.

What should a developer do while the pipeline is running? For very slow pipelines (running for hours), developers will naturally work on multiple tasks in parallel, but this demands for context switching, which is mentally exhausting. If the pipeline is only “somewhat” slow (say, 15-30 minutes), switching to another task is not really worth it, and this XKCD meme applies.

Developers often use the waiting time to do administrative tasks, or answer emails. For this reason, there is the common advice to keep the pipeline execution time as short as possible, ideally below 10 minutes, as stated in CircleCI’s 2022 State of Software Delivery report.

In this article, I will present five tips for speeding up GitLab CI/CD pipelines. But first, let’s see why pipelines are often slow (which alludes to how we can speed them up), and find concrete ways to measure how slow they are.

There are a few broad categories why pipelines are slow:

Before applying any of the optimization tips presented below, you should always measure first, to determine whether you have a problem at all, and if so, where exactly. You can look in various places. For instance, you can open the list of pipelines in the GitLab web UI and (manually) look at their execution times. If you find a slow one, drill down to see why it is slow.

A useful tool is the Pipeline Success and duration chart (docs), such as shown in the following image.

It does not really help you to drill down into details, but it offers a nice overview of the last 30 pipeline execution times. You can then open <project root URL>/-/commit/<commit SHA> in your browser, using the commit SHA identified in the above graph. From that commit page, you can navigate to the pipeline(s) for that commit, and look at its jobs to understand why the pipeline is so slow.

If you are familiar with Prometheus, a more detailed approach is to monitor your pipelines using Prometheus metrics with the GitLab CI Pipelines Exporter, as explained here. You can do the same for your runners (e.g. using the Prometheus Node exporter) and then try to find correlations between slow pipelines and the load on your runners. The main advantage is that you can use tools like Grafana with PromQL queries that extract any kind of insights and put them into dashboards (or send alerts). Prometheus collects metrics for as long as your configured retention period (while the Pipeline Success and duration chart only analyzes the last 30 commits). Thanks to the labels attached to the stored metrics data, you can build any kind of complex queries, e.g. limiting an analysis to only specific jobs or runners.

One more tip: if you use DAG pipelines (where you explicitly declare the needs keyword in your jobs), the GitLab web UI lets you visualize the dependencies, which often facilitates the discovery of bottlenecks (docs).

Many of the above tips were taken from the official Pipeline efficiency docs.

Because a big part of the pipeline performance depends on how many runners you have (and how performant they are), you need to choose an appropriate type of infrastructure for your runners. The following two types are common:

Let’s see how they compare:

The table should help you make qualified decisions. Exemplary:

If the two above “Ifs” don’t apply to you, you might want to favor the static fleet of runners, because their cache persistence (and non-existent provisioning time) allows for faster pipelines in general. Prefer having fewer (more powerful) GitLab runner machines (at least 2 for improved availability) over having many smaller, less powerful machines, because of better cache locality and reduced maintenance efforts.

You can also think about combining both approaches, e.g. having a “just large enough” fleet of static runners, extending them with a second fleet of dynamic runners. Use tags in the .gitlab-ci.yml file to differentiate which jobs you want to run by the static fleet and which ones by the dynamic one. Unfortunately, it is not yet possible to “soft-assign” jobs to runners, that is, tell GitLab to prefer your static runners over the dynamic ones (see open ticket).

You can choose between two caching mechanisms:

I present this optimization technique in detail in the article GitLab CI/CD: GitLab vs. Docker caching, including a demo project that illustrates both approaches for a Node.js application.

In a nutshell, for static runner fleets, Docker’s build cache is usually the better choice, for dynamically-provisioned runners, the distributed GitLab CI/CD cache is better.

Pipelines are often slow because of the way the jobs are structured. On a high level, there are three improvements you can apply:

In the .gitlab-ci.yml file, you can define both the cache and artifacts keyword in your jobs. Although the official GitLab docs do explain the differences between caching and artifacts here, the following table might help you clarify a few things:

Row #1 – reliability: refers to whether GitLab can guarantee that the files stored in the cache or artifact are available to the runner whenever the runner starts the job. With GitLab artifacts, this is usually the case, because the artifacts are uploaded to (and downloaded from) the GitLab server. GitLab’s cache, however, is just a best-efforts cache. The commands in the script-section of your job must not rely on the files in the cache to be present. Instead, you must design the commands in the script-section such that they definitely work, even if the cache is empty or out of date. The only exception to this rule is if you only have a single (static) runner to which all jobs are always assigned.

Row #3 – files are available across runners: if you have many runners (which are maybe even provisioned dynamically), a cache becomes less useful if it is only available locally per runner, because GitLab randomly distributes the jobs to different runners. For instance, if GitLab runs a cache-warming job in the first stage on runner #1 and then runs a build job in the second stage on runner #2, the build job would not have access to the warmed cache. If you are using self-hosted runners, this local caching mode is the default configuration! However, the runner admin can configure distributed caching (docs, more details in the article GitLab CI/CD: GitLab vs. Docker caching), and distributed caching is also configured for the shared GitLab.com SaaS runners.

It is possible to combine the advantages of caches and artifacts, by declaring both keywords in the same job. For instance, you can have a cache warming job that makes use of the fact that caches are persistent across multiple pipeline runs. That very same job also declares an artifact (for the same paths as the cache) to reliably transport the files to other jobs (which only need to read these files anyway). Keep in mind, though, that the GitLab runner creates two zip files, one for the cache, one for the artifact, even though they will have the exact same content in this scenario. Thus, the the reliability feature of the artifact incurs extra costs: storage and (compression) time.

Even with an optimally-structured pipeline, that (seemingly) contain only minimal jobs, some of these jobs may still be slow. Examples include jobs that compile sources, or run test suites, which become a bottleneck in your pipeline. Therefore, you should try to optimize these slow jobs.

If you have no idea how to do that, why not try a Internet search for “speed up <brief job description>”, e.g. “speed up rust compile time”? Two techniques that will often come up are caching and parallelization.

Optimizing the execution time of your pipeline will boost your team’s development productivity. But it needs to be done with care. You should only optimize those parts that promise a good cost-benefit ratio. And don’t fall victim to premature optimization. Instead, get your pipelines to work first. Parallelizing jobs and optimizing them with caching are usually the two most promising techniques.

Finally, you should always measure, before and after applying an optimization. Don’t blindly believe benchmarks made by others, but collect your own measurements. It also helps to document both successful and failed optimization attempts, to avoid that you and your team repeat approaches that don’t work, and instead implement those that do work.