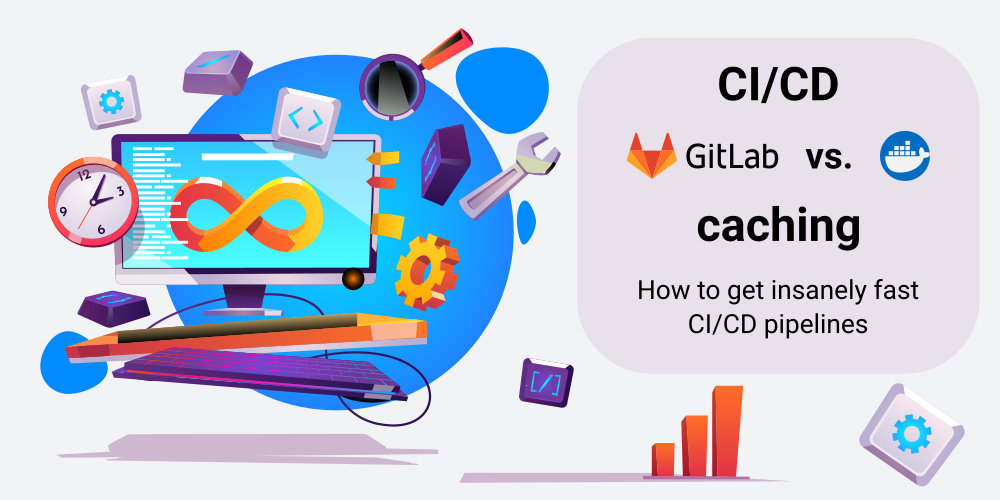 Using a Node.js example project I demonstrate how Docker-based caching can speed up your GitLab CI/CD pipelines even more than GitLab’s built-in caching mechanism. I explain how each approach works, and what the technical prerequisites are. I also list tools that support you with setting up a Docker-based CI pipeline.

Caching of files between CI jobs is a very common approach to speed up CI pipelines. Examples for such files are:

Generally, with GitLab CI/CD there are two caching mechanisms you can use (also in combination):

In this article, I will explain both approaches, followed by recommendations regarding which approach to use, depending on the types of GitLab runners you use.

Throughout the article, I will reference a GitLab demo project that illustrates both approaches.

The general approach of GitLab’s built-in caching mechanism is as follows:

The concrete cache zip storage location depends on how the runners are configured by the administrator: there are two different configuration modes:

In general, there are a few tricks you can apply when using GitLab’s caching:

Take a look at the gitlab-caching branch in this demo repository to see a concrete example for a Node.js application.

The Docker build cache (when using the BuildKit build engine) is essentially a large collection of locally-stored binary files (managed by the Docker and BuildKit daemons) that can be used for two purposes:

The remainder of this article assumes that you install the GitLab runner on a fixed/static fleet of machines, to actually see any speed-ups. Here is why: the Docker build cache is a local cache, managed by the Docker daemon on the host where the deamon is installed. For static machines, this local cache is persistent, in the same way the build cache is persistent on your developer laptop, where building a particular image for the second time is much faster than building it the first time.

However, if you use GitLab.com’s shared SaaS runners, you must declare a service: [docker:dind] in the .gitlab-ci.yml, which uses Docker-in-Docker, creating a temporary Docker daemon for each CI job. The local build cache of that temporary daemon always starts out being empty. Consequently, the speed-up effects vanish, because the temporary Daemon’s local build cache is not persistent!

The basic idea why Docker’s build cache speeds up CI jobs is this: instead of putting statements in the script section of your .gitlab-ci.yml file, you put them into a Dockerfile – even if you don’t need or want a Docker image in the end. The Dockerfile is actually a multi-stage Dockerfile (see docs). Inside the Dockerfile, you define several targets / stages (e.g. “install dependencies”, “build”, or “test”). In each of the CI jobs, you then run docker build for a specific target. For instance, the CI job that runs the tests then runs docker build for the “test” target.

Take a look at the docker-caching branch in this demo repository to see the same Node.js example application, ported to using the Docker-based approach. Note that you should carefully craft the .dockerignore file to maximize the caching efficiency. Otherwise, you might end up with always-changing files in your Docker build context (e.g. the .git folder), which invalidates the Docker build cache when you have statements such as “COPY . .” in your Dockerfile.

Comparison of both approaches

Understanding each approach works best by looking at a concrete example. Visit the demo repository and look at the two branches docker-caching and gitlab-caching to understand how each approach works. If you switch to the pipeline view in that GitLab project, you can see the execution times of each branch. I ran two pipelines per branch, where the first pipeline needs to start from scratch (empty cache) and the second pipeline has everything cached already.

As you can see, the speed-up effect of GitLab caching is rougly 2x, whereas the speed-ups of Docker-based caching are roughly 6x.

Why and when Docker-based caching is faster

Assuming that you use a static number of GitLab runner machines with Docker daemon installed (whose Daemon socket is mounted into the CI job containers, see docs), using Docker’s build cache (over GitLab CI/CDs built-in caching) is faster for the following reasons:

When to use GitLab’s CI/CD caching

There are of course also a few reasons why you might want to prefer the traditional GitLab caching mechanism:

If you decide to use Docker-based builds, moving commands from the script section of the .gitlab-ci.yml file to a Dockerfile with multiple stages, you might as well use dedicated tooling. There are tools (requiring Docker) that help you define CI pipelines (and their jobs) in a CI-vendor independent language, and they also let you run the entire pipeline locally on your development machine. I found the following tools in this area:

As I’ve illustrated, Docker-based caching can achieve much better speed-up effects, compared to GitLab’s built-in caching (6x vs. 2x). However, these speed-ups come at a operative cost: you need to maintain a (static) fleet of (virtual) machines that have runners installed (which have a local on-disk cache), and keep them up-to-date over time. The fact that the number of runners is static also means that if your pipeline workload varies strongly, you may have to “over-provision” your GitLab runner fleet, resulting in higher per-month server costs, compared to dynamic scaling approaches (e.g. using GitLab’s SaaS runners, dynamic runner scaling on AWS, or using the Kubernetes executor), where short-lived CI job execution environments (e.g. VMs or Kubernetes pods) only cost you money while they are running. The downsides of the dynamic approach is that costs are more difficult to predict, and that the execution environments are short-lived: this makes your jobs slower because they must always download/upload cache contents over the network (which is slower than using a local disk), and because a Docker daemon (in case you need one) must always be dynamically created (via DinD) each time a job runs.

In general, as with any optimization measure, you should not rely on what other people (including me) say. Always measure yourself how big the effect of the optimization (here: caching) is. For instance, you may discover that caching large folders (such as dependency cache folders like “node_modules“) is not worth it if your runners have a very fast internet connection anyway, where re-downloading packages does not take long. This is especially true if you use GitLab’s SaaS runners, which have to download the cache from the (distributed) cloud storage anyway.

3 thoughts on “GitLab CI/CD: GitLab vs. Docker caching – how to get insanely fast CI/CD pipelines”