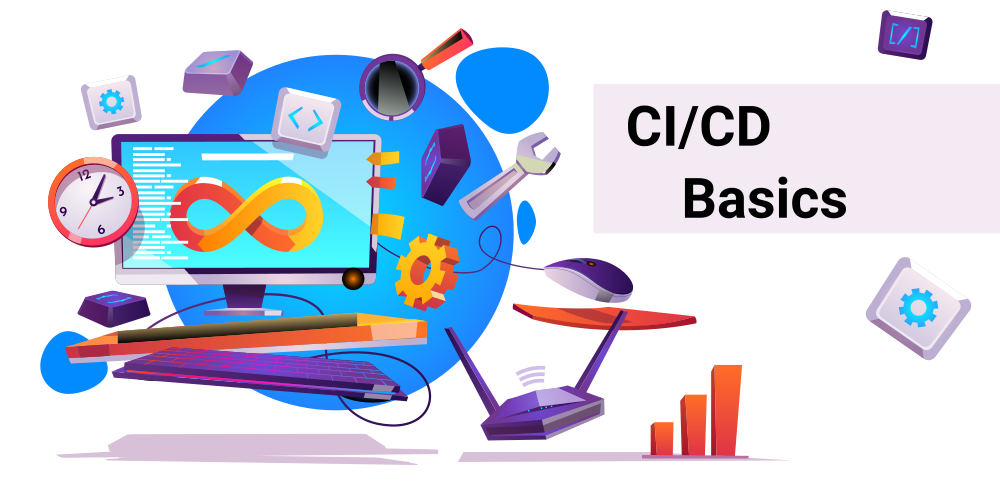 CI/CD is the process of fully automating tasks such as building, testing and deploying your software. Instead of running these tasks manually, on a developer laptop, you have them executed on a server all the time. In this article, I dive deeper into the definition of CI/CD and related terms, explain the background of CI/CD, as well as its advantages and disadvantages.

The term “CI/CD” has become omnipresent in the media typically consumed by developers. CI/CD is short for Continuous Integration & Continuous Delivery/Deployment. CI/CD is being hailed as the savior of your software project. The simple promise: just create CI/CD pipelines, and your project will be free of bugs or technical debt, and will be delivered on schedule.

Unfortunately, things are not that easy. If you don’t understand the background of CI/CD, the continuous development methodology, or if you don’t have a good understanding of the different disciplines and skills needed for creating the tasks that run as part of a CI/CD pipeline, you are effectively just cargo-culting. The remainder of this article is my interpretation of what CI/CD is, and why you need it. We will start with examining the background, define various terms, and also look at the kinds of tasks that should be part of your CI/CD pipelines.

This article is generic and not dependent on any concrete CI/CD implementation. If you want to learn more about using GitLab for CI/CD, check out my other article, where I go into GitLab-specific details of CI/CD pipelines.

The core idea of CI/CD is to save you money when developing software, via automation. That means that you automate as many tasks as possible that happen between “developer pushes code changes to Git” and “your customer can use the features on the production system”. Automation has advantages (which generally hold, not just for CI/CD), such as:

The C (continuous) in terms like CI or CD refers to the fact that the concrete tasks that are part of CI or CD (more details below) are executed all the time on some CI/CD servers, e.g. every hour, or on every Git push. This is an improvement over the “traditional” development process, such as (repeated) Waterfall. Here, activities like packaging a software, or running tests, are often done or triggered manually, e.g. at the end of a development life cycle phase – e.g. once per month at the end of a sprint. Such manual execution is a bad idea, because it is expensive:

Continuous development is not free

While the advantages are clear, you must be aware that introducing CI/CD is not free! Essentially, you are front-loading (“shifting left”) the workload. You need to create (and maintain) the scripts that automate the tasks that (without CI/CD) were done manually. In some cases, e.g. system testing, this can become rather challenging. Before introducing a new CI/CD automation task, think clearly about the costs (of implementing it) and the potential cost savings the automation will yield.

Challenges of setting (and maintaining) CI/CD pipelines include:

Fortunately, you can gradually introduce CI/CD. You can start with just one automation step (e.g. building your software), and extend it over time.

Let’s take a look at the meaning of some basic terms:

The definition (and separation) of Continuous Delivery vs. Deployment can vary among different sources. GitLab, for instance, states that for Continuous Delivery, deployment does not happen automatically (but always requires the final press of a button), whereas other sources state that deployment does happen automatically, but only for testing environments.

On a conceptual level, CI/CD systems like GitLab CI or GitHub Actions let you define pipelines (called workflows in GitHub Actions), which contain one or more jobs. Each job is executed by a runner, of which there may be several. Thus, multiple jobs may run in parallel, whenever possible.

The below image is a visualization of a GitLab CI/CD pipeline with 4 jobs, where the 2 test jobs can run in parallel, because they don’t depend on each other:

A pipeline is typically defined using a YAML or JSON file that contains the jobs, as well as the events that trigger the pipeline. Typically, a pipeline is triggered whenever one (or more) commits were pushed (running the pipeline for the most recent commit of that push), but there many alternative events, e.g. the creation of a PR / Merge Request, or a regular schedule (think: Cronjob). If any of the jobs of a pipeline fail, the developers will get notified (e.g. by email), so that they can investigate the issue.

As for the runners, you can either use so-called shared runners , or dedicated self-hosted ones. Shared runners are offered by the people hosting the GitLab/GitHub/… instance. They are called “shared” because they run pipelines of many projects, which thus share the runner. Alternatively, you can run your own “self-hosted” runner and register it with your project. The downside is that you need to take care of installing and maintaining that runner. The upside is the increased speed with which your pipeline is executed, because you would configure the runner to only serve your own projects.

Let’s take a look at typical tasks you would have your CI/CD pipelines execute, separated by the CI and CD stage.

Test attribution to CI or CD

Building CI/CD pipelines is a necessary step if you want your long-lasting software project to succeed. The long time frame makes it worthwhile to actually build and maintain the pipeline. In other words: setting up elaborate CI/CD pipelines for a small prototype is not worth the effort.

There are many CI/CD tools (free and commercial) on the market, like GitHub Actions, GitLab, Jenkins, Jenkins X, or CircleCI. However, ultimately it’s not about choosing the “right” tool, because they are all very similar in terms of functionality. It is much more important that you live the continuous development methodology, and understand the basic principles behind each task a CI/CD pipelines executes. If you don’t have any people who know how to write tests, or harden your application’s security, what is the point of writing some half-assed unit tests or buying SCA / SAST software (whose reports you don’t understand anyway)?

It normal that you will struggle during the starting phase. It’s not easy to decide which tasks to automate first. It is not always easy to estimate the time savings, and it is close to impossible to estimate the costs of implementation. You can start out by automating those things that you annoy you the most (and that also take an considerable amount of time). To avoid that developing the pipeline comes to a halt, make it a habit to allocate resources (e.g. eight hours per month) to continuously improving the pipeline over time, making it a part of your sprint.