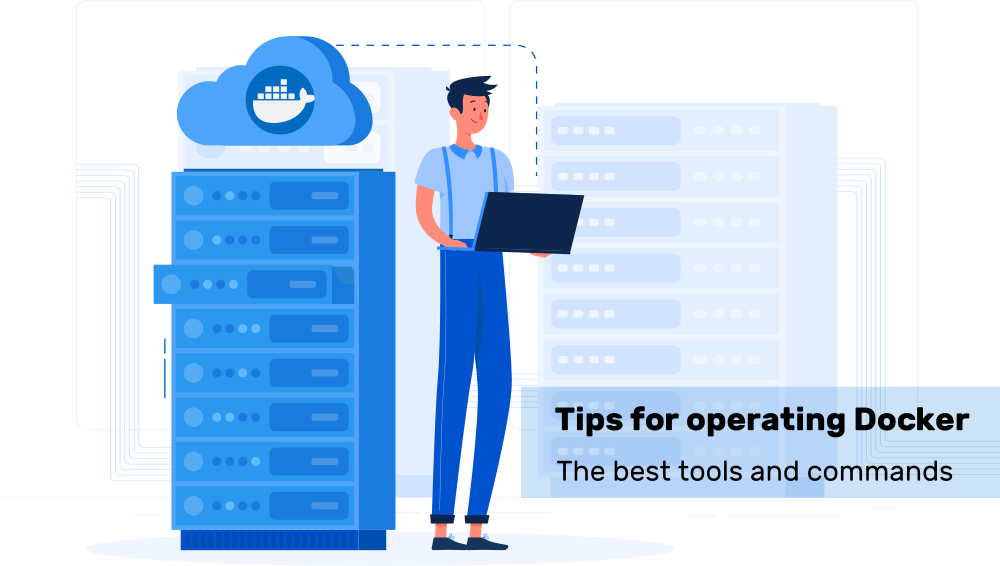 This article presents useful tips for operating Docker engine on a Linux server. I explain how you can improve the server’s security via automatic updates and scanning the images of your running containers, how to reduce the maintenance efforts by making sure your disks don’t run out of space, and how to set up a Prometheus-based monitoring system that lets you quickly diagnose performance issues. Finally, I present useful Docker management tools, such as Portainer.

When it comes to operating (running) software packaged as Docker / OCI images, you have several options:

In this article, I’ll focus on the latter case, using the Docker engine on a single Linux server. I will explain best practices and useful commands and tools, which get you the following advantages:

Some of these tips also apply to a local Docker for Desktop setup.

One very common problem with operating a Docker server (long-term) is running out of disk space. The reason is that Docker does not do any automatic clean-ups. Most notably, container logs and unused images and volumes are never cleaned. We can solve this by running cron jobs that do regular cleaning, but also by configuring the Docker daemon.

When the Docker daemon starts, it reads the configuration file located at /etc/docker/daemon.json. You may need to create this file, in case it does not exist. From experience, I found it useful to tweak the following settings:

The following daemon.json example summarizes the tips above:

Changing the content in daemon.json only takes effect after restarting Docker (e.g. via sudo systemctl restart docker). Also, some settings (such as log-driver) apply only to new containers – existing containers will not automatically use such changed settings. Therefore, you may want to stop and remove your running containers and re-create them, e.g. via
docker-compose stop && docker-compose rm && docker-compose up -d

If you just learnt about these tips and want to learn how much disk space the Docker logs already consume, run
find /var/lib/docker/containers/ -type f -name "*.log" | xargs du -sh

It is possible to fine-tune the log driver (and its settings) per container. This is useful if you have containers with very verbose logging (that you cannot configure otherwise), and you want to grant this container a larger upper limit than other contains.

To get an overview of the currently consumed disk space of volumes, images and containers, run docker system df. You can also add the -v to this command to see a more verbose list of objects.

Cleaning up these items can be done by a very simple cron job that you run in any frequency you like, e.g. once per week or month. It is, however, challenging, to determine how aggressive you want pruning to be. Here are a few options:

Note: the -f flag makes the commands “unattended”, i.e., gets rid of the confirmation prompt.

There is also docker system prune -f which deletes all stopped containers, unused networks, dangling images, and build caches (but keeps volumes and unused images). Adding the -a flag (docker system prune -af) applies the -a semantic for images, i.e., it deletes both dangling and unused images. Adding --volumes at the end of the command additionally deletes unused volumes.

A useful clean-up option is filtering (see docs), which supports labels and timestamps:

Make sure that you are aware to which objects the filter applies. This is a non-brainer if you run object-specific commands, such as docker (volume|container|image) prune, but it is less obvious when you run docker system prune. Carefully read the filtering docs of each command, and actually test them, before putting them into a cron job, to avoid unfortunate surprises. For instance, docker volume prune does not support filtering by timestamps, but only by labels!

To run these commands regularly, consult your Linux distribution’s manual for how to set up cron jobs. I also found crontab.guru helpful to build cron time strings.

When you install Docker engine into your Linux distribution using the official Docker docs, it may very well happen that your distro’s auto-update mechanism does not update the Docker engine by default. For instance, on Debian (which uses unattended-upgrades to install updates from package repositories every night), Docker is not covered, because it comes from a separate repository. To fix this for Debian, edit the file /etc/apt/apt.conf.d/50unattended-upgrades and add the line
"origin=Docker";
into the Unattended-Upgrade::Origins-Pattern section.

If you use a different Linux distro, you need to figure out yourself whether your distro also has this caveat.

Another problem is that the auto-update mechanism does not necessarily restart any services after it updated the files. Consequently, you either need to find ways to achieve this (e.g. see here for Fedora/CentOS) or simply have a cronjob that regularly reboots the server. The latter also ensures that kernel updates are properly applied.

Monitoring for security and performance issues

It is important to explicitly configure automated monitoring of your Docker-related server activity. Without such monitoring, you are basically asking your users to do monitoring for you, were users send you messages whenever a service goes down. Automated monitoring improves this, having the following advantages:

There are many tools on the market to achieve this. The stack I liked so far is the following:

It is possible to automate security monitoring (vs. running these jobs manually): simply run the security tools (which scan your host and the used images) regularly as a cron job, and plug the output of these tools into your Prometheus stack via the Node Exporter’s textfile collector. For instance:

In case you run many services on a single machine, it is useful to limit the CPU and memory resources for each service. You can read up on the gory details in Docker’s official docs. The following subsections present “in a nutshell” summaries:

If you limit memory, you should usually also disable the use of swap memory.

If you use docker run commands to manage your containers, use something like --memory="2g" --memory-swap="2g". Both values should be the same (to disable swapping), and you can use the suffixes b, k, m, g, to indicate bytes, kilobytes, megabytes, or gigabytes.

The docker-compose.yml equivalent (for the non-Swarm mode) looks as follows:

You can also do both, e.g. pinning to 3 specific cores, but at the same time limit the overall use to 1 virtual core, which means that the container is only allowed to use about one third of each of these 3 specific cores.

Docker also offers a completely core-independent approach with --cpu-shares, which you set to an integer (relative to 1024, which is the default value). Here, the usable CPUs are not limited, but Docker assignes priorities when multiple containers (combined) want to use more CPUs than are available. It is similar to the “niceness” of Linux processes. A higher value for --cpu-shares means that the container gets a higher priority.

In docker-compose.yml, the settings are called cpus, cpuset and cpu_shares respectively.

Note: you can verify the effective memory limit and the current CPU usage via docker stats.

Most people manage their Docker server with the docker CLI, using commands such as docker ps, docker run, etc.

However, there are several more graphically-oriented tools that can make your life easier:

In many projects, a single server can easily handle the load caused by your users. Using Docker (as opposed to Kubernetes) is a good idea. Docker’s advantages are the huge ecosystem of images, and the isolation it provides between containers. This eliminates any kinds of conflicts that would have existed when installing everything via the distro’s package manager directly.

Naturally, you don’t want to have too much work to maintain a server. The tips offered in this article should vastly reduce maintenance efforts. Granted, it takes a bit of time to set up a working monitoring system, but once established, it is easy to replicate to other servers. The management tools I presented should simplify your life even more.