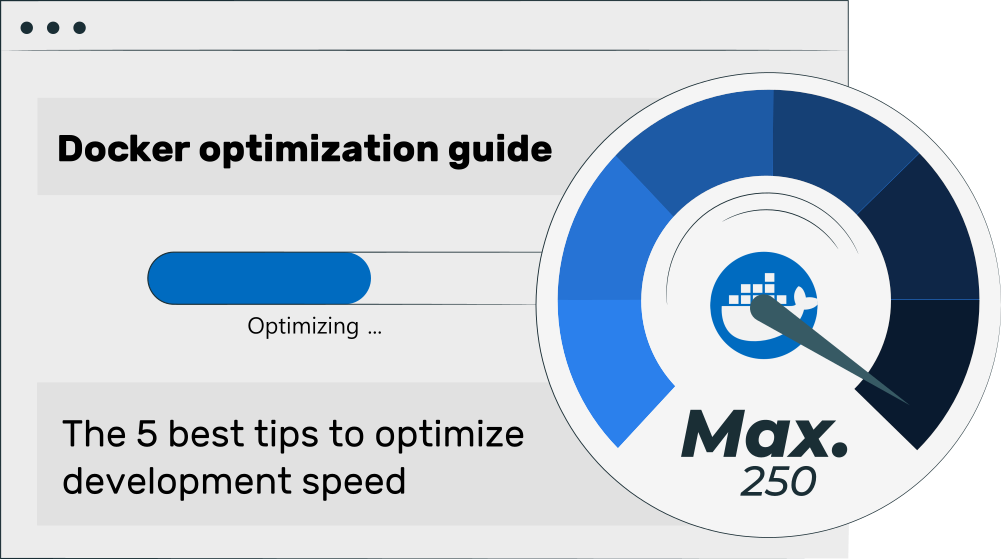 This article presents 5 tips that improve the speed of building Docker images locally. It focuses on two problems: iterating on your unfinished Dockerfile (where you still figure out configuration options and which packages to install), and iterating on your code (assuming a finished Dockerfile). I discuss tricks such as using BuildKit, the .dockerignore file, or tweaking the RUN statement order in your Dockerfile.

Docker has become an established tool for many software developers, not only to share and deploy software, but also to develop it. During development (on your development workstation), you will typically face two kinds of challenges that slow you down:

Let’s take a look at solution approaches for each problem separately. Note that you can (and should) combine them!

Due to Docker’s image caching feature (explained below in section Use a smart RUN statement order), you can improve your Dockerfile iteration speed by deliberately creating “too many” layers during the iteration phase (and aggregating them at the very end):

Once your Docker image works as expected, you finalize your Dockerfile: you reduce the number of layers / RUN commands, by aggregating RUN statements into fewer RUN statements that each span multiple lines. See the example below:

To avoid that image building completes even though some errors happened in a large RUN statement, use the Bash strict mode: add a RUN set -eo pipefail command at the top of your Dockerfile. See here for background information.

You can use BuildKit’s RUN --mount=type=cache feature (as documented here) to speed up lines such as RUN apt-get install -y ... . This speeds up re-building layers that involve package managers, such as apt, pip or npm.

The basic process is as follows:

Approach 1: Use container-based development mode of your IDE

IDEs such as Visual Studio Code let you develop within running Docker containers directly. For VS Code, this feature is documented here and is called Dev containers. The basic idea is that code files exist on your host, and are mounted into a Docker container. Inside the container, not only are all the dependencies installed (as instructed in your Dockerfile), but VS Code additionally installs parts of itself into that container, e.g. the language parsing features, a debugger, or various other VS Code extensions. VS Code thus runs on the host (just the UI, basically as thin client) and in the container. Any code you change on the host will be instantly available inside the container, due to the bind mount VS Code has set up.

You can find more details about container-based development environments in my blog post here.

One of the advantages of Docker is its layer-caching feature. In a nutshell, each statement in the Dockerfile creates a new image layer. When you repeatedly run docker build ..., the Docker daemon reuses as many cached layers as possible. Docker automatically determines whether it can reuse a layer, as explained in these official docs. Once a layer (or its respective Dockerfile statement) is considered to be modified (and Docker can no longer use its cached version), all image layers above the first modified one have to re-built, to accommodate the changes.

The general idea to avoid frequent re-builds of the entire layer stack is to design the Dockerfile in such a way that statements/layers that change rarely come first in the stack, and layers that change frequently come last.

You are developing a containerized Docker application. In your Dockerfile you have the following statements:

The problem here is that the frequent code changes invalidate the cached layer for line #3. Thus, the layers built for lines 3-5 must be rebuilt on each code change, and the pip install command is rather slow. You can improve this example as follows:

Now, pip install only needs to run when the requirements.txt file changes. Otherwise, the cached layer is used.

Approach 3: Use a .dockerignore file

The copy process is often slow if there are too many (large) files/folders on the host’s file system which you don’t want copied, such as the “.git” directory, or any other larger files/folders.

The .dockerignore file lets you exclude files that shall not be copied into the build context, which speeds up building. See here for the official docs. In spirit, it is very similar to the .gitignore file.

What you put in there depends on your project (and the used programming languages), but here is a general recommendation:

Optimizing your development workflow is very important. While memes such as this one are funny and often true, you don’t really want the “compiler” (Docker, in this case) forcing many micro-breaks upon you. You can’t really do anything meaningful during these breaks. Attempting to do several tasks in parallel is mentally exhausting and error-prone, at least for some of us. Learning and applying the above tips will make you more efficient, avoiding idle time. In the follow-up article I will discuss more optimization tips tailored for your CI pipeline, some of which you can also apply to your local development workflow.