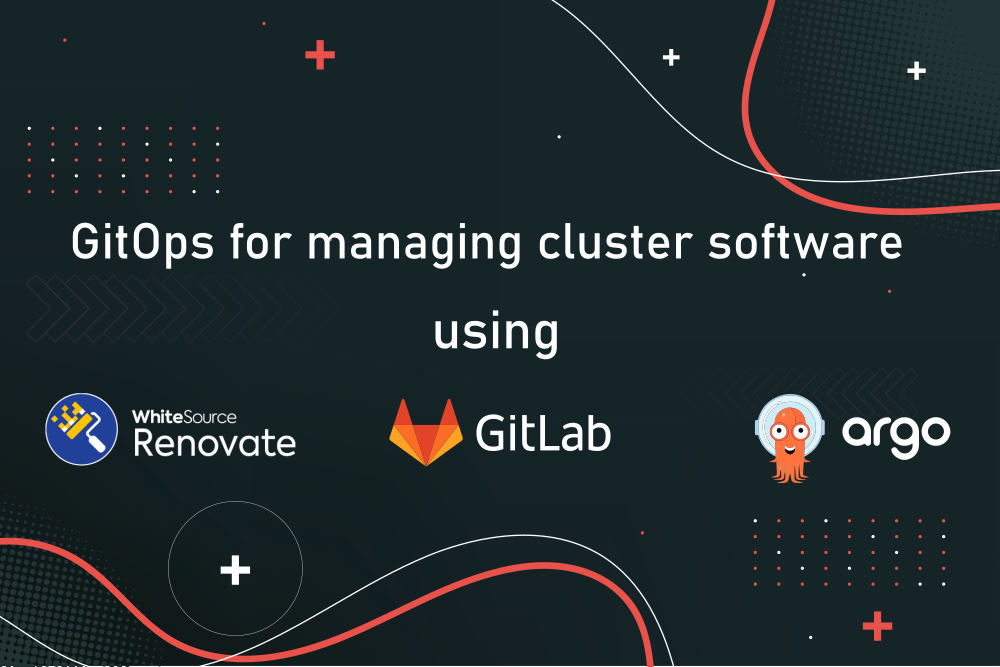 This article demonstrates how to use the ArgoCD GitOps controller to deploy applications to a Kubernetes cluster. The definitions/manifests of these applications, such as an Ingress controller, monitoring stack, etc., are stored in GitLab. They are automatically updated by Renovate Bot, which regularly scans your GitLab project for outdated dependencies. A demo project illustrates how deployment errors (happening in ArgoCD) can be reported back to GitLab, which automatically creates incident tickets in GitLab, providing observability of failed deployments to your team right in GitLab.

The GitOps approach has many advantages over “pushing” code into production (“CI Ops” approach), such as improved security. You can find out more details in my earlier article about GitOps. However, a big disadvantage is the additional complexity. From the point-of-view of your development team, which probably used to deal with only one platform (like GitLab or GitHub) to do everything, the GitOps approach introduces a completely separate, isolated system: the Kubernetes-based GitOps controller, such as ArgoCD or Flux. If something goes wrong in the GitOps controller (such as being unable to deploy an app), your dev-team won’t be automatically notified, unless a cluster administrator configured a monitoring system in the cluster (such as the Prometheus stack that I present in detail in this article series).

This article presents a solution to this problem. The Setup section below explains the technical details, but from a bird’s eye perspective, this happens:

This closes the loop for your development team, who only needs to look at a single system: GitLab. My proposed solution coincidentally solves another issue: the constantly-evolving software ecosystem. All third-party systems, including the basic cluster components every Kubernetes cluster needs (such as the metrics-server, the monitoring stack, the GitOps controller, the Ingress controller, cert-manager, etc.), get new versions all the time. This article demonstrates how you can use Renovate Bot to automatically update these software components, while having fine-grained control over which applications and which version-upgrade-types (major vs. minor) should happen fully automatically, and which ones should require manual approval. I already talked about Renovate Bot in detail in these articles here and here.

In my proposed solution, I’m using ArgoCD as the GitOps controller implementation. While there are many alternative implementations, such as FluxCD or Fleet, I like the comprehensive web UI of ArgoCD. The web UI really helps diagnosing problems, or observing the progress of a deployment. The only real disadvantage I’ve observed with ArgoCD is that it does not really use the Helm engine when installing Helm charts (which FluxCD does better!). Instead, ArgoCD only applies Helm templating, and converts Helm hooks to ArgoCD hooks. This causes problems with a few Helm charts, which are often resolved by ArgoCD users complaining to the Helm chart authors, who then (sometimes) adapt their chart to be ArgoCD-compatible.

For the remainder of this article, I assume that you have basic level of understanding of ArgoCD. Most notably, you need to understand that ArgoCD installs a new Application CRD. In other words: the ArgoCD is (mostly) stateless, and stores the applications it manages in the cluster’s etcd database, as Application CRs, such as this one:

The following figure explains the components of my solution approach:

You can find the template project on GitLab here: https://gitlab.com/MShekow/gitops-with-monitoring

On the left you see the Cluster Configuration management repository, which plays the central role. It stores the state of the applications we want installed in the cluster, in a declarative way as YAML files. Both Renovate Bot and the ArgoCD GitOps controller continuously watch this repository. Renovate Bot automatically updates versions in the YAML files, and ArgoCD automatically applies the changes it observes in the repository to the cluster.

Let’s look at the set up sequence. Someone from the operations team…

From now on, the ArgoCD controller continuously monitors the cluster configuration repo, specifically the applications folder, which contains a Helm chart. The Helm chart is not made of the “usual” K8s objects (Deployment, Service, Ingress, …) but contains ArgoCD Application Custom Resource objects. This approach is called the ArgoCD App of Apps pattern. The applications Helm chart is the “parent app”, and the yaml files in its templates folder are the “child apps”.

Data flow for a deployment

From now on, the data flow for a (failing) deployment is as follows (focus on the green arrows):

My demo project already comes with a preconfiguration of this data flow. Its README describes the steps you need to do, as well as necessary modifications.

Installing your own applications via GitOps

Apart from components made by third parties, you can also install your own software. Typically, you would store this software in a separate Git project/repository, referred to as application repository. You could have many application repositories, e.g. one per application. I’ve already explained the deployment flow for such a setup here in my GitOps article, under the Multi-repo tab.

Let’s see how you can modify the setup I presented above to also deploy Docker images / Helm charts of your own application:

On the left, you see an example for one of your application repositories. I omitted the Kubernetes cluster box from the above image simply to avoid clutter – the cluster still exists in the actual setup, of course.

The basic idea is that you add a CD pipeline to your application repository, which runs on each push (step 1), after your project’s CI pipeline successfully built, tested and pushed the Docker images of your application. In step 2, the CD job performs the following steps:

For this approach to work, there are a few more access tokens involved:

A note about GitHub

In this article, I’m hosting this project on GitLab.com (and it also works on self-hosted GitLab instances), simply because GitLab comes with a Prometheus-stack-integration. Other platforms, such as GitHub, do not have this feature, but you can use projects such as the alertmanager-github-receiver instead, which turns Alert notifications (sent by the Alertmanager) into GitHub issues.

The GitOps approach offers many advantages, such as continuous reconciliation between what we declaratively specify we want to have deployed, and what actually is deployed. The fact that CI and CD are now separated also improves security. In this project I have shown how to overcome the main disadvantage of this separation: lack of monitoring when deployments go wrong.

Although it takes a bit of time to understand my approach, or to tweak its settings, I’ve come to find it invaluable to have a completely declaratively specified cluster setup. It makes it easy to set up new clusters that use the same stack, be it for the same or a different project.

As I indicated above, you can exchange the individual components for others. You can, for instance, use GitHub instead of GitLab, or exchange ArgoCD for other GitOps controllers, such as FluxCD.