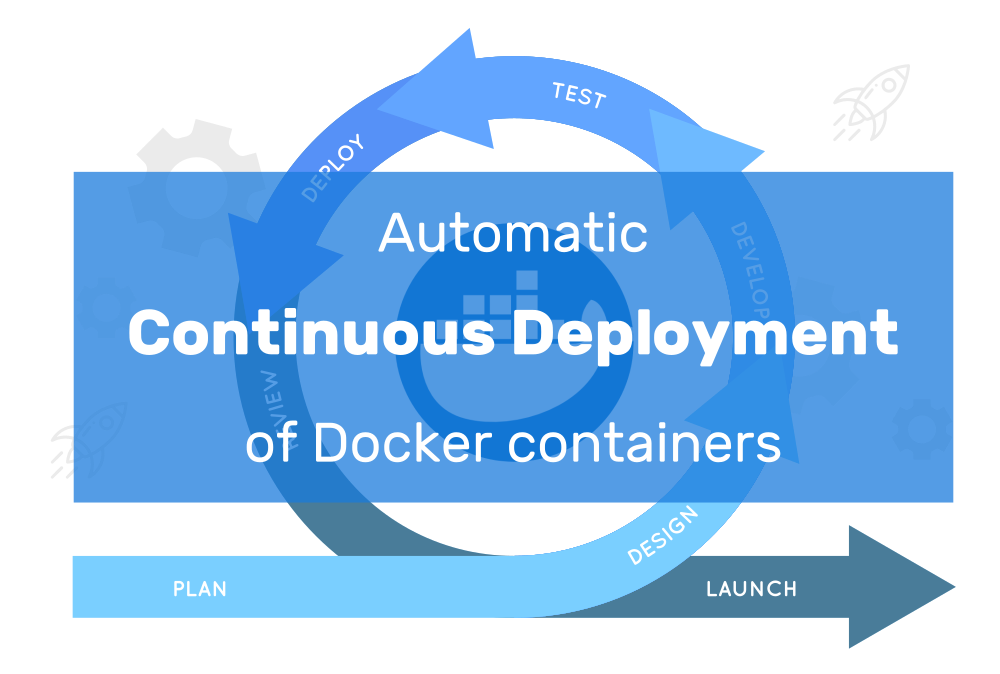 This article explains how to achieve Continuous Deployment of Docker-based software, using either pull-based approaches (external tools such as watchtower and harbormaster), or push-based techniques (deployment from the CI/CD pipeline). I explain the advantages and disadvantages of each approach, and also illustrate how automated testing greatly reduces the risk of unnoticed failed deployments.

When you use Docker (not Kubernetes) in production, doing Continuous Deployment (CD), that is, pushing changes to production (or other environments), is challenging. While Kubernetes has fancy GitOps controllers, such as ArgoCD or FluxCD, which are excellent CD tools, it seems that the Docker ecosystem lacks such mechanisms. Still, you need a mechanism to automatically update your deployment, whenever your images have been updated, or when configuration values have changed. At the same time, you want to avoid that a fully-automated deployment process breaks your production system, without you noticing it.

Any manual solution, where you connect to the production system (e.g. with SSH) and update deployment manifest files (such as docker-compose.yml), or using Portainer‘s web interface to update images tags, is not really sustainable. It involves manuall effort on every rollout, which can seriously decrease the deployment frequency, e.g. because it is an annoying task that teams keep procrastinating, or because of the process-overhead of asking the operations team to do the deployment.

Let’s take a look at different approaches to automate the deployment with Docker.

A pull-based approach is one where you install an additional tool on the Docker server, which continuously pulls and applies changes from a different system, such as a Git repository, or a Docker image registry. Two prominent implementations are:

There is one caveat to pull-based systems, though: you need to avoid that a broken deployment-update goes unnoticed. This could easily happen, because the pull-based system is a separate / isolated system (and if errors happen there, you don’t automatically get notified). To achieve this, you additionally have to set up some monitoring mechanism for your containers, such as the Prometheus-stack, which I discussed in this article, and configure it to notify you in case of errors.

A push-based approach pushes changes via a CI/CD pipeline from a Git repository to your production system. As is common when using GitOps and CI Ops, the idea is that you store a set of configuration files in Git which declare the state of the production system. This configuration file could be, for instance, a docker-compose.yml file, which contains the concrete version tags of the images used by each service. You can find out more details about GitOps and CI Ops in my GitOps introduction article.

On a technical level, you need to establish a reliable method for the CI/CD job to reach your production environment. Two common methods are:

For Docker, the sequence that updates your deployment can be as simple as this:

The following table highlights the key differences between the two variants of the push-based approach vs. the pull-based approach:

When it comes to the operational complexity (considering the number of systems you need to maintain), the push-based (SSH) approach is the clear winner, because you don’t need to manage any additional systems. I’m assuming that SSH is already enabled on the production server anyway, and that you have a CI/CD system in place. In contrast, the pull-based approach is the clear loser: you need to maintain two additional systems: the tool that pulls (e.g. watchtower), and the monitoring stack.

Regarding state synchronization: the pull-based approach (using harbormaster), is the only one that can guarantee that the system state declared in Git (in the docker-compose.yml file) always matches the actually deployed state – none of the other approaches do this. The pull-based system is also the only one that can achieve full observability that also covers the system while it is running (not just at deployment time). Of course, if you instead choose a push-based approach, you can additionally install a monitoring stack to achieve full observability as well.

Having persistent deployment logs is useful for auditing purposes, and can be helpful to diagnose issues in production. Push-based approaches are better in this respect, because the CI/CD system keeps logs for the CI/CD pipelines anyway, including the relationship between Git commits and the pipeline instances. Pull-based tools are much more limited here, as they only offer logs of the container of the tool (e.g. harbmaster).

Finally, you want to limit access to your production system to as few people as possible. The pull-based approach offers the best protection, because only few (operations) people have access to the servers, and they configure credentials to Git or the image registry – none of the developers get access. The runner-based push-approach is also quite good: it does not leak any credentials to the SCM / CI/CD system (and therefore, to developers). However, it does not protect you completely: a developer could update the CD job to do “rm -rf /“, destroying your production environment. However, this will be stored in the CI/CD pipeline (and Git commit) log, which lets you track down the responsible developer, leading to a serious conversation with them…

Having automated tests at the system-level is generally a good idea, to improve your system’s reliability. At the very least, you should have a smoke test, which only starts the containers of your application, verifies that none of the containers immediately crashed, and performs a few simple HTTP/TCP requests to them.

If you have tests, you should run them in your CI/CD pipeline before triggering the deployment job (or pushing the images to the registry using the production-level tags). Having successfully run smoke- and system-level tests greatly reduces the risk for the deployment to fail. If you use the pull-based approach (where you are, otherwise, “blind” w.r.t. deployment errors) you can (at least initially) skip monitoring of the deployment process.

On the implementation level, there are many ways to run such system or smoke tests in a pipeline. In a nutshell, I highly recommend you use a proper tool for running these tests, such as testcontainers, over creating low-level Bash scripts. With “Bash scripts”, you need to spend a lot of effort for things like:

To solve these problems all at once, take a look at testcontainers. testcontainers is a solution that lets you start and stop containers (or compose stacks) from testing frameworks, with support for Java, JavaScript, Scala, Python, Go, and Rust (see here). testcontainers is a library (ported to all these programming languages) that wraps calls to the Docker socket. It offers a high-level interface to control all kinds of container-related aspects, such as volume mounts, logs, or networking (ports). It ensures that containers are safely shut down (no matter whether your tests failed or succeeded) and it also solves connectivity issues, or waiting for a container to be ready.

Again, note that testcontainers is not a container itself, nor is it shipped as one, nor does it orchestrate the tests. It is just a “normal” library that you need to install into your project, like you would install other testing-related libraries such as JUnit, pytest, etc. You use it in your “normal” Java/Python/Go/Scala/… testing code (as if you were writing unit tests), which you start using your typical test runners, such as JUnit or pytest.

In this article, I presented both push- and pull-based solutions that offer automatic Continuous Deployment of Docker containers, and contrasted how they are different. Which approach you choose is up to you, and depends on your requirements. Unless you are being audited and need to actually prove the deployments to an outside party, continuous synchronization (offered only by the pull-based approach) is not necessary. In this case, a push-based approach is favorable, because it is easier to implement, and has many other advantages.

Irrespective of the approach, it is highly recommended that you create and run tests (at least smoke tests), and that you implement full observability by installing a monitoring stack, such as the Prometheus stack.