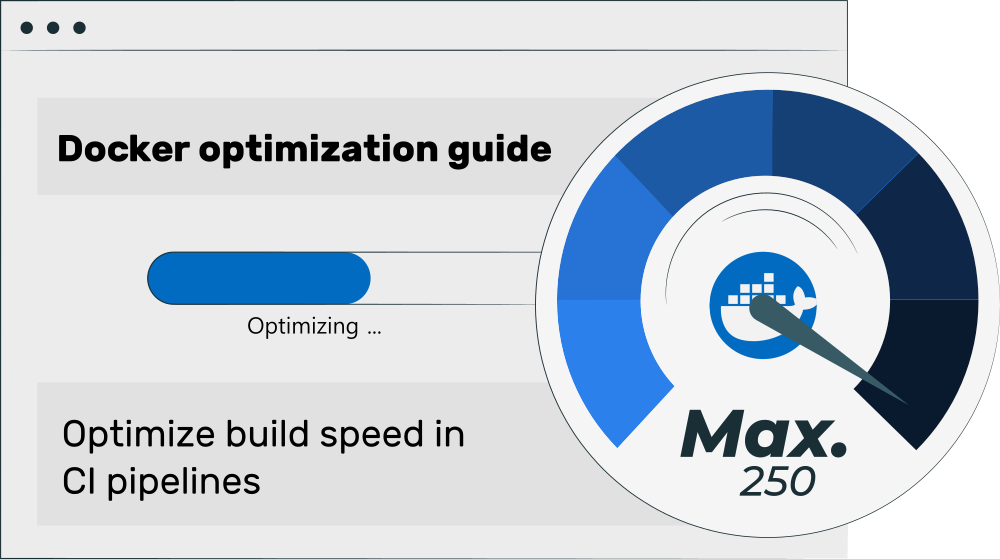 This article offers several tips for tweaking the build speed of Docker images in CI pipelines. I explain multiple caching-tricks offered by BuildKit, which is an alternative image build engine. I also elaborate on how the .dockerignore file and extra arguments to package managers such as apt can speed up your image builds.

As further explained in my previous CI/CD Basics article, CI/CD is the process of fully automating tasks such as building, testing and deploying your software. Instead of running these tasks manually, on a developer laptop, you have them executed on a server all the time, whenever a developer pushed some code.

If one of the steps in a CI/CD pipeline is to package your application as Docker image (and push it to an image registry), you may have noticed long build times. In this article, I present several tips for tweaking the docker build command, so that building becomes fast, which improves the feedback time for your developers.

Multi-stage builds allow you to define multiple Docker images (which build upon each other) within the same Dockerfile. This speeds up image building in those scenarios where only some steps of the image-build are slow, e.g. compiling a large third-party component, when these steps don’t need to be repeated every time. With multi-stage builds, you can extract these slow steps into a separate helper base image #1, which is used by your (frequently re-built) run-time image #2. This speeds up the build speed of image #2, because a cached version of image #1 can be used. The official manual offers an excellent introduction into multi-stage builds.

Note: another optimization technique is caching, presented in the next section. When you use multi-stage builds, you also need to push the earlier stages (image #1) for the caching to work. See this article for details.

Use BuildKit with proper caching configuration

BuildKit is an alternative backend to build Docker images from your Dockerfile. Since Docker v19.03 it is included into the docker CLI, but (as of January 2022) it is still not used as default backend on Linux. Consequently, you need to explicitly activate it in your (Linux-based) CI pipeline! Note that since Docker v20.10, BuildKit is used by default on Docker for Desktop on Windows and macOS!

The main advantages of BuildKit are:

The general steps to use the caching features are as follows:

The .dockerignore file lets you specify files that the Docker build process should not copy from the host into the build context. My previous article presents the concept in detail here. This greatly speeds up local Docker image building (because it omits folders such as “.git”), but your CI pipelines can also benefit in case your repository contains larger files or folders that don’t need to be included into the image.