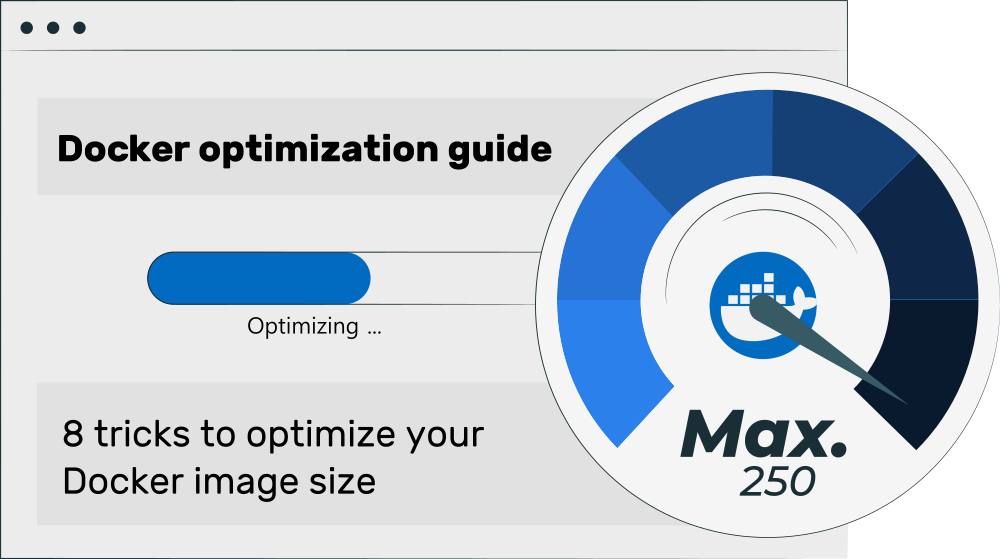 This article introduces several tricks that you can apply at build-time, to reduce the size of your Docker images, including the use of a small base image, multi-stage builds, consolidation of RUN statements, avoiding separate chown commands, or using the tool docker-slim.

Docker has become a commodity to package and distribute (backend) software. So much so, that the Docker image format has been standardized by the OCI (Open Container Initiative) in a specification called image-spec. You can use Docker or other tools (such as buildah or kaniko) to build images, and the resulting image can be loaded by any compatible container run-time. Throughout the rest of this article, I’ll use the “Docker image” terminology, but I really mean OCI-compliant images.

One challenging aspect is to keep the size of Docker images small. The core advantage of small Docker images is cost reduction: small images consume less disk space, can be downloaded (and extracted) faster, and thus reduce the container start time.

Let’s take a look at different approaches to reduce the Docker image size.

Choose a suitable base image

The base image is the name of the image referenced in the FROM statement at the beginning of your Dockerfile. The base image decides which Linux distro you are using, and what packages come installed. When you choose the base image, carefully examine the available images (e.g. on Docker Hub) and possibly-available “slim” image tags for these images:

Often a Docker image becomes large simply because your app needs to download and compile dependencies used by your app. The image size increases due to unneeded files & folders that you only need to build/install, but not to run your application. Examples include:

With multi-stage builds, you can split your build process into two (or more) separate images:

To learn more about multi-stage builds, refer to the corresponding section in my Optimize Docker image build speed in CI article.

Whenever you only need certain files temporarily (that is, you download/install them, use them, then delete them again), you should build a single RUN command that performs all these steps, instead of having multiple RUN commands.

The following is an inefficient example, where you temporarily download source code just to compile it, finally deleting the source code again (because you don’t need it, to run your application):

This is inefficient, because each RUN command adds a new layer to the image, which contains the changed files and folders. These layers are “additive”, using an overlay-type file system. However, deleting files only marks these files as deleted – no disk space is reclaimed!

Instead, this alternative is better:

In the above example, the source code does not end up in the image at all, because it was already deleted before the RUN command completed.

You can apply the same trick when you need to install packages (e.g. with apt, etc.), that you just need temporarily, e.g. to download or compile software. In a single RUN statement, use the package manager to install the packages, then use them, then uninstall them again.

docker-squash is a Python-based tool (installed via pip) that squashes the last N layers of an image to a single layer. The term “squash” has the same meaning as in Git squash. Squashing is useful to reduce your Docker image size, in case there are layers in which you created many (large) files or folders, which you then deleted in a newer layer. After squashing the affected layers, the deleted files and folders are not part of the squashed layer anymore. docker-squash saves the resulting image locally. Note: docker-squash cannot squash arbitrary layers in the stack – only the last N layers (where you can specify N, and N can also be “all” layers). In other words: in a 7 layer image, you cannot squash only layers #3 to #5.

See the docker-squash page for installation and usage instructions. To figure out which layers to squash, you can use the docker history <imagename> command (which lists the layers and their size), or look at the efficiency score of each layer using dive, which is a tool to explore Docker images, layer by layer.

Save space when installing dependencies

It is common to use package managers to install third party software component that your app depends on. Examples for package managers are apt or yum (for Linux packages), or programming-language-specific ones, such as pip for Python.

There are two approaches to save space with package managers:

Saving space works differently for each package manager. Here are a few examples:

In a previous article, I explained how you can use BuildKit for building Docker images, with its cache mount feature, see here for details. However, you must not combine that cache mount trick with the “clear cache” trick described in this section, because they would cancel each other out!

Either you use BuildKit’s cache mounting feature (adapting the RUN statements in your Dockerfile), which ensures that the cache folders of the package managers will not be baked into the image (but remain on the host where the BuildKit daemon is running). Or you don’t use that trick, and instead run the cache-cleaning commands (e.g. apt-get clean).

Whenever some statement in the Dockerfile modifies a file in the build container in any way (including just meta-data changes), a whole new copy of that file is stored in the new layer. This is also true for changes in file ownership, or permissions. Thus, recursive chowns can therefore result in very large images, because Docker duplicates every affected file. Therefore, instead of:

This will perform the chown as part of the COPY, ensuring that only one instance of the files is created.

The .dockerignore file lets you specify files & folders that the Docker build process should not copy from the host into the build context. My previous article presented the concept in detail, see here. This not only speeds up Docker image building (because the build context is populated faster), but this can also make your image smaller: it avoids that you accidentally copy large files or folders into the image, which you don’t need to run your application. An example are data files (e.g. big CSV files with raw data required only for automated tests), which someone incorrectly placed in the “src” folder whose entire content is copied into the image via a COPY statement in your Dockerfile.

docker-slim is a tool that reduces your image size, by starting a temporary container of your image, and figuring out (via static + dynamic analyses) which files are really used by your application in that container. docker-slim then builds a new single-layer image that contains only those files and folders that were actually used. This makes docker-slim the most effective approach of all those listed here, but it does not come without caveats!

To handle this disadvantage, you need to tweak docker-slim via two mechanisms:

The official manual provides further details about how to install and use docker-slim. Here you can find a GitLab-based demo repository where I build a non-optimized Docker image first, then slim it down with docker-slim, perform a smoke test on the slim image, and finally compare the slim and non-slim images. The pipeline includes scripts that generate a list of files that docker-slim removed from the slim image, which you should inspect manually. If you spot any files that your application might need, add them to the preserved-paths-list.

To get small Docker images, there unfortunately is no “silver bullet”. Either you do not use the “catch-all” tool, docker-slim, but then you need to spend time implementing the other tips listed in this article. Or you do use docker-slim, but then you need to invest time to write automated system-level tests (which identify problems in the slimmed-down container) and tweak the docker-slim probes or “preserve path”-lists.