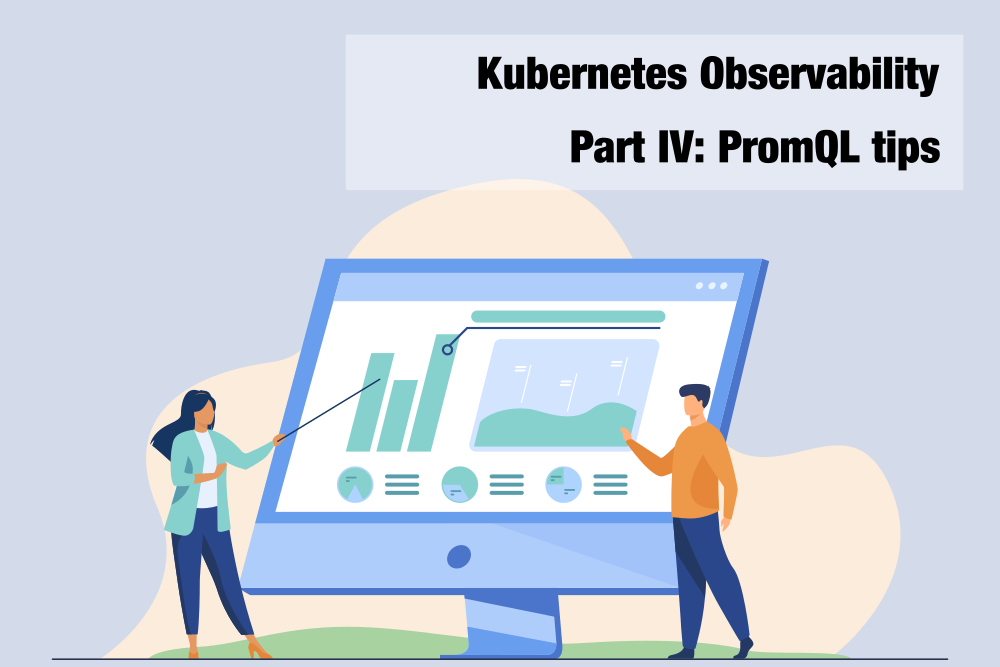 This is a deep dive into PromQL, the Prometheus query language. I discuss the basic data formats (instant vector and range vector), explain the different types of operators and functions, and then elaborate on how binary operators do result vector matching. I conclude with various PromQL tips and hints, and help you get started in practice.

The Prometheus stack is a popular set of tools used to achieve observability of your system. As indicated in the learning guide outlined in part I of this Observability article series, one important step (on the technical track) is to understand the Prometheus Query Language, PromQL. You need PromQL in two places: in Prometheus itself, to build alerting and recording rules, as well as Grafana, to select the data visualized in your dashboards. This article takes a detailed look at PromQL, the result data formats instant vector and range vector, the different operators, and how to match result data rows whose labels or sample count do not line up. Finally, I conclude with various tips and hints.

I recommend that you experiment and write your own PromQL queries while reading this article. In this previous article of this series I have already demonstrated different installation options. Once more, I highly recommend PromLens, which is a very helpful tool that visualizes and explains complex PromQL queries graphically. You can run it for free with a personal license on your own (non-commercial) infrastructure, or use a public live demo instance.

In this article, I will assume that you are aware of the difference between “time series” and “metric”. If not, please refer to my explanation here.

When you type PromQL queries into the query window (e.g. in Grafana, or Prometheus’ web interface on port 9090 of your Prometheus server), you get back 0 or more result rows. The result always has a type:
instant vector or range vector.

In this example, the result is an instant vector that contains ~100 time series rows, and each row contains the most recently scraped sample value for that time series. Note that the result does not contain the timestamp of when this sample was collected – it is assumed that it was collected recently. Prometheus actually discards samples that were collected more than 5 minutes ago, and corresponding time series rows would not be part of the returned result.

To help you remember it better: “instant vectors” have their name because the resulting rows only contain those time series with samples that were collected “at this instant” (usually a few seconds ago).

If you write something like some_metric_name{foo="bar"}, the bold part is called a selector, which you use to filter (as in: narrow down) the time series returned in a query. The = (equal sign) in this example is called a matcher. The other matchers are != (unequal), =~ (regular expression) and !~ (negated regular expression).

You can use multiple selectors – in this case, only those rows are returned that satisfy all selectors (in other words: Prometheus applies the AND logic to selectors). You can also provide multiple selectors for the same label key (but different matcher types). For instance, you could write a query such as node_filesystem_size_bytes{mountpoint=~"/run/.*",mountpoint!~"/run/user/.*"}
to get the total size of disk partitions on all of your nodes, whose mount points start with “/run/“, but excluding all those starting with “/run/user/“.

The part in angular brackets (e.g. [5m]) specifies the time window for which samples are returned. For instance, [5m] tells Prometheus to return samples scraped between “just now” and “up to 5 minutes in the past”. The available units are: s (seconds), m (minutes), h (hours), d (days), w (weeks), y (years).

Sometimes you may want to query older data, e.g. to compare the request rates of “a week ago” with the current request rates. For this, PromQL offers the offset <duration> keyword that you can add at the end of a query. It works for both instant and range vectors!

For example, a query such as some_metric_name[5m] offset 1h will give you samples that were scraped between “1 hour ago” and “1 hour and 5 minutes ago”.

In practice, PromQL queries are rather large and complex. Often, they are compositions of several sub-queries, which you combine using operators, which is also a common technique in SQL queries. PromQL operators expect that their “input” is of the right data type (range vector, instant vector, or a scalar), which is why I explained the available data types in detail above. A scalar, by the way, is simply a floating point number.

The aggregation always happens over one (or more) label keys that you specify. There are two basic methods for specifying these labels. Let’s illustrate them by example, for the metric, node_filesystem_size_bytes, which has the label keys job, instance, device, mountpoint, fstype.

When running either of the above queries (which both achieve the same thing, aggregating over fstype and mountpoint), aggregation works as follows:

Prometheus will internally create groups, where each group contains time series that have exactly the same labels (with equal label key and label value) for those label keys that shall remain in the final result. In this example:

The sum operator sums up the sample values within each of these groups, and returns one sample per group:

Binary operators are called that way because they take two input operands as input.

There are three types of binary operators:

Most binary operators take two instant vectors as input and produce an instant vector as output. But some operators also support a scalar to be one of the inputs, e.g. a query such as some_metric / 1024

While arithmetic operators are easy to understand and use, there are a few things to know about comparison and logical operators:

For instance, for a query such as some_metric * 2 ^ 3 Prometheus would first compute 2^3 (=8) and then multiply sample values of some_metric with 8, because ^ has the highest priority.

There are dozens of functions, as indicated by the official docs, for all kinds of purposes, e.g. mathematical functions or date/time-related functions. Explaining them all would take many blog posts.

Instead I’d just like to explain one function, rate(), which you will need very often in your PromQL queries, and which is particularly poorly explained by the official docs. rate() expects a range vector of a metric of type counter. Because the sample values of counters are monotonically increasing, they are not useful for graphing, or in a alerting query in that raw form – you would not know what value to compare them against. The rate() function helps you here, because it “flattens” this monotonically increasing flood of values by computing the delta of your sample values over a defined time period, and it normalizes the delta value so that it is “per second”.

An example is very helpful to understand this better. Suppose the range vector of process_cpu_seconds_total[5m] returns the following samples (only showing samples for one specific time series with labels instance="demo.robustperception.io:9090", job="prometheus"):

What rate() conceptually does is to compute this:
(latest value - oldest value) / (latest timestamp - oldest timestamp)

In reality, the algorithm is much more complex. rate() intelligently accounts for missing sample values, and also handles counter resets (where scraped sample values are decreasing, because the exporting application crashed/restarted).

When you use rate() in a graph that draws rate(some_metric[...]) as a line, then, conceptually, each pixel of that line is created by calling rate() separately, offsetting the time window by a few seconds each time. In reality, of course, there are much more efficient APIs where a single call will produce the array of rate() values the graph needs.

A few tips regarding rate():

When a binary operator is given two instant vectors as input, it has to match the time series rows of the left side of the operator with the rows of the right side. This is known as vector matching. There may be a disparity considering either the labels, or the (number of) samples, or both.

If you are lucky, the labels and sample count match exactly one-to-one, in which case you don’t have to do anything special – your PromQL query can simply be <left expression> <operator> <right expression>. Prometheus can match the samples to the respective other samples, where the labels match.

However, this is often not the case, and you can tell from the fact that something is wrong with matching, if the result of a binary operator query is an empty instant vector. Fortunately, there are mechanisms you can use to handle these issues:

In PromQL, something like metric_name{key="value"} is just syntactic sugar for {__name__="metric_name",key="value"}

Another rule is that you must have at least one matcher in a selector that has a value different to the empty string. For instance, queries such as {foo=""}, {foo!=""}, and {foo=~".*"} would return an error, because they all just use (or would match) an empty string as value in the matchers!

In case you are not familiar with regular expressions: the . stands for the character class (match any character) and the + suffix stands for “at least once”, thus the two characters .+ together tell Prometheus to match any metric whose name consists of at least one character.

Aggregation operators: by vs. without

When using aggregation operators, you should usually prefer the use of

Why? Because the labels of time series are not always stable over time. Labels are typically either instrumentation labels (which usually don’t change) or target labels (attached by Prometheus during a scrape). Target labels are very dynamic, and are often not under the control of the person writing a PromQL query. Consequently, it is better to use without aggregations (where you aggregate over the definitely-known labels, which removes them from the result), leaving the resulting instant/range vector with all the other labels. This approach lets the query-author notice when suddenly new labels pop up (e.g. in a dashboard or alert notification) and they can then tweak the PromQL query, if needed. Using without is especially important for alerting rules, to preserve all the other labels in the alert notifications.

The by aggregation can still be useful in some cases, e.g. when aggregating over an info metric (whose instrumentation labels are expected to change more often), e.g. a query such as count by(release)(node_uname_info)

PromQL queries are primarily used to write alerting rules, and to build Grafana dashboards. The main difficulty with PromQL is the huge amount of available metrics. For instance, the /metrics endpoint of Prometheus itself already has over 150 metrics, the node exporter can easily have over 250 metrics, and other exporters (or your own application) will have many more. It would be a daunting task to scan all these metrics to decide which ones to use in your dashboards or alerting rules.

Fortunately, the Prometheus and Grafana community has already done a lot of the work for you:

These resources will help you get started, because you no longer need to start writing queries from scratch. Instead, you adapt them to your needs, using your understanding of operators, functions, etc. provided in this article.