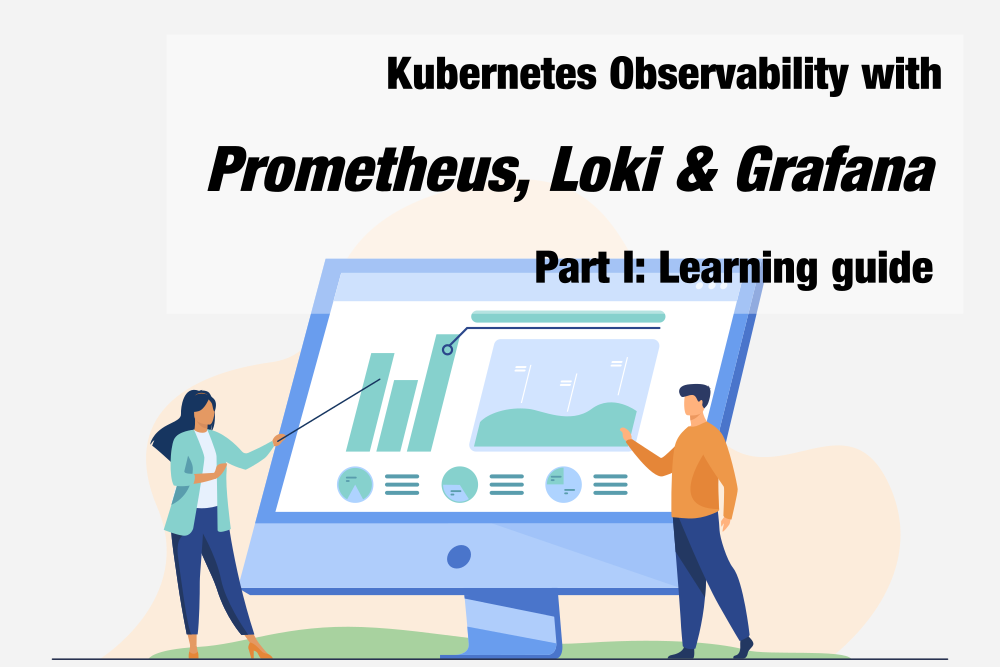 In this article I define the term observability, why you need it and what basic steps are necessary to achieve it. I then present a generic learning guide for how to implement observability for Kubernetes with the Prometheus-stack.

This is the first part of a series of blog posts about Kubernetes observability. You can find all other articles of the series here!

It is always important to quickly determine that your system is malfunctioninig, and to reduce the time needed to diagnose the problem and fix it. For smaller, non-distributed systems, which run on a single machine, you can do black-box monitoring (e.g. Nagios-style checks) to determine whether something is wrong. Once the checks failed, alarms would fire, and you’d look at the syslog to determine what’s wrong.

However, applications with a large user base need to scale, depending to the request load. Platforms like Kubernetes implement horizontally-scaling architectures, where the components of your system are distributed over many compute nodes, which are dynamically started and stopped. Unfortunately, these systems are much harder to monitor, because now you have to gather, aggregate and analyze different kinds of data (such as logs) from all your nodes.

In recent years, the term “observability” (for distributed systems) has emerged, that discusses this problem. I highly recommend the excellent primer “Distributed Systems Observability” by Cindy Sridharan to learn more about observability (free e-book available here).

According to Cindy Sridharan, observability is a system property that lets you quickly understand what is going wrong inside your system (and enables you to fix it quickly), by observing its outputs. However, observability is more than what many practitioners think: just collecting logs, metrics and distributed traces, and doing alerting on the metrics, is not enough. Instead, you’ll need to change your way of thinking entirely and put additional work into multiple phases of your software development life cycle (SDLC). You really need to “bake” observability into your system. To be more concrete, let’s look at possible modifications of the SDLC phases:

Observability is a very loaded term. There is no clear definition of what separates observability from monitoring, only that observability is more than monitoring. The above definition is Cindy’s, and others may have different views, tool vendors in particular, who need to sell you something. See this excellent article for a discussion.

This article is the first part of a series on how to do observability in Kubernetes with Prometheus stack. I quickly found out a way how not do it: just following some tutorial. This did not work, because I was missing a lot of fundamental knowledge. I didn’t understand how the Kubernetes-specific tooling (e.g. the Prometheus operator) worked – I did not even realize how standalone-Prometheus works, nor did I have a proper understanding of basic observability patterns and best practices. However, you need to understand all these aspects to be able to monitor and observe the right parts of your system, and to be able to debug problems caused by the observability tools themselves (e.g. an alert not firing even though it should).

Why Prometheus, Loki and Grafana?

There are many tools in the observability space, from Open Source Software like Netdata or Zabbix, to commercial (SaaS) products such as Datadog, Splunk, LightStep, sumo logic, or Instana. In this article series I focus on the “Prometheus stack” (with the accompagniyng tools, Alertmanager, Loki and Grafana), which is OSS and has become very popular, in the Kubernetes context and otherwise. That is, you can also operate Prometheus etc. on bare metal, or using Docker (compose).

If you’re also interested in distributed tracing, I suggest you look at Grafana’s Tempo.

When I started learning about this field, I had no clear idea where to start. Over time, I figured out what blocks of knowledge build upon each other. I identified three tracks depicted below, which is a kind of flow chart. You can (and should) do the Technical track and the High-level observability track in parallel. Think of them like the “theory and practice” tracks you’d go through, when getting your driver’s license. Only once you have finished both of these tracks it makes sense to start working with Prometheus in Kubernetes.

For the sake of simplicity, this learning guide is limited to Prometheus, Alertmanager and Grafana. Log management with Loki is not part of it, because it is an “easy” addition, once you are familiar with all other concepts. I’ll go into more details about Loki in a future article.

Let’s look at goal of each individual steps in more detail:

Getting Prometheus up and running in Kubernetes is no easy task, because you need to have a lot of background knowledge. With the learning guide presented in this article, I’ve only drawn a rough map, outlining the journey to a Prometheus-based observability stack for Kubernetes. However, you still need concrete learning resources for each step of the learning guide.

For steps covered by the High-level track, I recommend that you take a look at the book Practical Monitoring – Effective Strategies for the Real World (2017), which provides an excellent overview. As for the steps, check out the other articles of this series.