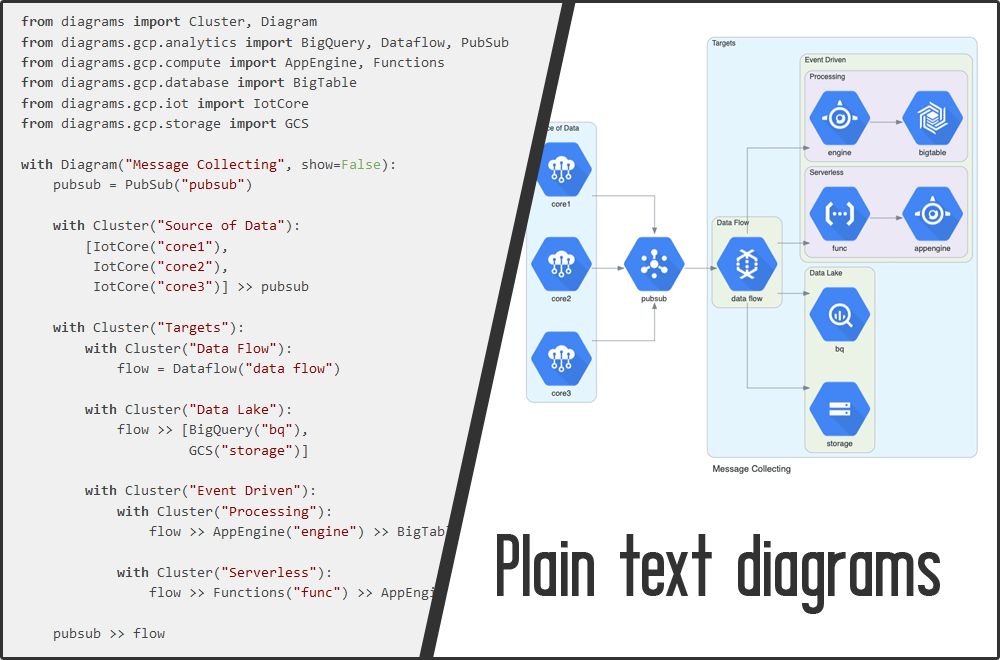 In the previous article, Plain text documentation in version control, I made my point that documentation can be created as plain text documents in version control, using a markup language such as Asciidoc. The main advantages of this approach are that plain text files can be viewed with any text editor, and can be diffed, just like source code, which helps you understand changes over time.

The same concept can be applied to diagrams. Instead of drawing diagrams in a WYSIWYG editor, you write a few lines (using a mark up language) into a plain text file. A generator converts it into an image file. Consider the following two examples, using Mermaid and PlantUML:

You can play around with such examples interactively, by using a live editor, for PlantUML (see here) or Mermaid (here).

By the end of this article, you will learn that many such mark up languages exist, which let you define all kinds of diagrams, such as UML-like diagrams (class, state, activity, sequence, deployment, use-case, …), business process diagrams, GANTT charts, tree-like diagrams (including mind maps), or UI mockups.

Let’s start with the advantages:

Of course, there are also disadvantages:

A taxonomy of tools and markup languages

In a nutshell, there are three types of plain text markup languages (with respective generator tools):

Before we take a closer look at these tools, let’s take a step back and try to understand the terms model and view I used above.

A model describes the individual components of your system (including various attributes) and their relations to other components, using some kind of meta-language as notation. A concrete example would be a class model that models the different (souce-code-level) classes, including their name, description, attributes, and methods.

A view makes a model tangible, by visually expressing it. At this level the software producing the view decides (or lets the user decide) how the graphical representation of the model looks like, to minute detail. For instance, for a class model, it would decide that each class is represented by a box, and relations are drawn as arrows. A view also incorporates all kinds of graphical details, such as the background color of each box or the canvas, the line widths, the coordinate, margin or padding of each box, the font type and size, etc. It often makes sense to create multiple views for a specific model, where each view illustrates different aspects, answering a specific question about the model.

Let’s now re-examine the three types of markup languages I introduced above:

As you can imagine, each approach has a few problems.

WYSIWYG editors have two issues. The first one is inconsistency of elements whose details diverge in different views. Let’s understand that by looking at an example. Suppose you first build diagram #1 for your model, e.g. a class diagram. Next, you create diagram #2, e.g. a sequence diagram. You copy and paste certain elements from diagram #1 to #2 to save time. At some point, you change an element (e.g. the name of a class) present in both diagrams only in one of the diagrams. You end up with inconsistent views. The second issue with WYSIWYG editors is that diffing of the produced plain text files in version control is difficult, because these produced files are huge, and even small changes (e.g. changing the position of an element) can produce a massive, incomprehensible diff.

The core issue of model-based tools is that they are very domain-specific. For instance, Structurizr DSL is specific to the C4 model to document software architectures. Also, the generated diagrams are built using automatic layout algorithms, where a high-level model markup language might not have bothered with providing syntax that lets you fix layout issues manually. As a consequence, the objects in generated diagrams can be illogically arranged, and there’s nothing you can do about it.

The core issue of markup languages, such as PlantUML or Mermaid, is that they you can still end up with inconsistent views, as I described it above for WYSIWYG editors. To work around the problem a bit, there are mechanisms such as an include <file> command. This lets one diagram include another one, re-using all (or a selected sub-set) of its elements. Still, the files are just diagrams, not models. For instance, you cannot define a PlantUML class object in file #1, then define a PlantUML sequence diagram in file #2 (which #includes the class from file #1), because PlantUML will still render the class as a class box (including its attributes) and turn the sequence diagram into a class diagram. The following table summarizes the pros and cons:

Existing generator tools and markup languages can be divided into generic and special-purpose tools, where the latter serve a single, specific domain. Let’s take a look at generic tools first:

While creating diagrams on your own works, you will typically achieve the best results in a collaborative workshop. When working on a real whiteboard or flip chart is not feasible (hello COVID-19), people often use WYSIWYG editors which support real-time collaborative editing, such as Excalidraw or diagrams.net (draw.io).

Exemplary, you can collaboratively work on a PlantUML diagram, if you and your peer both use VS Code (with the Microsoft Live Share and PlantUML live renderer plug-ins) or an IntelliJ-based IDE (with a collaborative plug-in, such as Code With Me or CodeTogether).

Any comprehensive documentation should include diagrams, because images often help convey ideas and concepts more effectively than text. This article made a strong case for using plain text diagrams which are rendered to a images, rather than drawing them with an editor and saving them as immutable, hard-to-compare pixel or vector graphics.

As always, the right tool depends on the context and your objective. Traditional diagramming tools, like Visio, are not always a bad choice. For instance, if you are at the beginning of a project and just need to draw a few throw-away sketches to get a first idea of your system, then a digitized whiteboard tool (such as Visio or Excalidraw) are a good fit. But once your views become more stable (and/or larger) and you need traceability on how they evolve (think: diffing), plain text diagrams, built with model-based tools or markup languages, will serve your needs better.