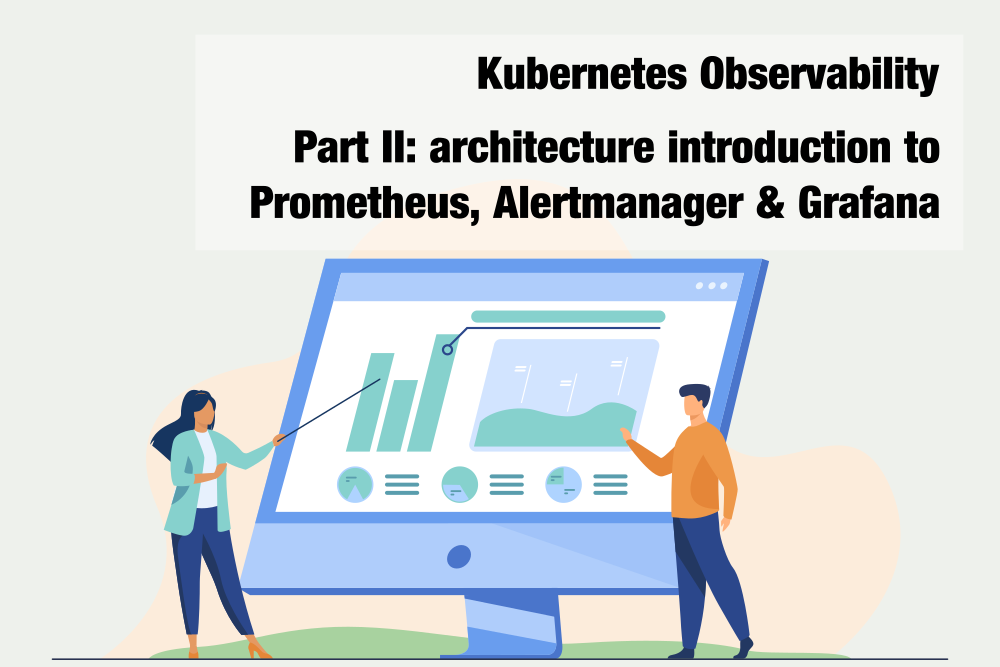 This article takes a detailed look at the architecture of the Prometheus stack, consisting of the individual applications Prometheus, Alertmanager, Grafana, Pushgateway, and various exporters. I discuss how each component is configured, which kind of data it stores, and how Prometheus can be scaled.

The Prometheus stack is a popular set of tools used to achieve observability of your system. As indicated in the learning guide outlined in part I of this Observability article series, the first step (on the technical track) is to understand the architecture of this stack, and how the different tools fit together. This article takes a detailed look at the architecture, explains the rationale behind it, how the individual components are configured, and also explains how Prometheus can scale.

The Prometheus stack consists of many separate programs / applications, which all have a dedicated responsibility. They all communicate with each other via HTTP to achieve their overall goal: observability of your (possibly large-scale) distributed system. The team behind Prometheus chose this separation-of-concerns-approach so that each program can be configured and deployed separately (on different machines, if necessary). It also reduces the complexity of each individual program. Let’s take a look at the Prometheus architecture diagram of the official documentation:

At the heart we have the Prometheus server, which has several sub-systems, most notably the TSDB, the retrieval component, and a HTTP server. The TSDB is a persistent, disk-based Time Series Database. The retrieval component regularly pulls “metric data” from other applications that expose these metrics (via HTTP), e.g. every 15 seconds, and stores them in the TSDB. This regularly pulling is also called “scraping”. The Prometheus HTTP server offers a REST endpoint that allows other systems, such as Grafana, to query stored metrics data.

In general terms, metrics are numeric data that provide information about a particular service (e.g. a process) or system (e.g. a server node). A concrete example could be the disk usage of a node, or the total number of requests made to a HTTP server (or to a specific HTTP path). Metrics are stored in a TSDB where they can be efficiently compressed, processed and retrieved.

In Prometheus, metrics have a simple format: <name>{label1=value1,label2=value2,...} <float64 value>

In Prometheus, metrics are created by applications such as exporters (see right below for more details). Metrics are exposed as plain text via HTTP, typically on a /metric endpoint, with one metric per line. As you can see, there is no timestamp in the output, because Prometheus expects that the returned metrics reflect the current state, and Prometheus will add the timestamp when storing the scraped data into its TSDB.

Where do metrics come from, you ask? There are two basic types of applications that expose metrics:

Back to scraping. At the end of each scrape loop, Prometheus evaluates alert rules on the metrics stored so far. You write these alert rules using Prometheus’ query language, PromQL. An example for an alert rule might be “disk usage of any disk on any node has exceeded 90%”. If any of the configured alert rules are triggered, Prometheus generates an alert and pushes it to the Alertmanager application. Note that the alert is just a (JSON) object, no emails, pager messages, etc. have been sent yet! When the Alertmanager receives the alert, it stores it in its internal database. The Alertmanager deduplicates and groups the alerts (to reduce spam), using a configuration you provided. It then generates alert notifications, i.e., it routes alerts to the correct receiver, such as email, or PagerDuty.

There are two more boxes in the architecture diagram that require an explanation:

It should help you understand the sub-components of the different applications. Let’s look at the data flow once again:

The above diagram also demonstrates which artifacts are used for configuring the applications (files, database, or both), so let’s dive deeper into the configuration aspects.

Each application (Prometheus, Alertmanager, Grafana, Exporters) has a different configuration approach, as summarized by the following table:

Meaning of the columns:

Configuration is done via multiple files, most notably these:

Like Prometheus, Alertmanager is partially stateful (storing received alerts and silences), but also partially stateless, as it is also configured using files.

Grafana does not store any metrics data, but always retrieves it from Prometheus at run-time. The configuration of Grafana (e.g. data sources, users & authentication, or dashboards), however, is statefully stored in Grafana’s internal database. They can be manipulated via Grafana’s REST API, or its web interface. However, Grafana also has a provisioning mechanism that lets you overwrite the internally-stored configuration via files when Grafana starts, and in regular intervals (whenever Grafana detected a change in file contents).

Because Prometheus expects exporters to only expose metrics data of the application for the time of the scrape (in other words, Prometheus does not expect historic metrics data), exporters are typically completely stateless.

The configuration approach highly depends on the application and exporter. Some exporters don’t require any configuration, but most typically, stateless CLI arguments and/or environment variables are used to configure the exporter.

If you search for “push vs pull monitoring”, you will find wildly different views about which one is “better”. Most of these articles are written by tool manufacturers who then justify why their approach is the “slightly superior” approach, because of some optimizations they applied, or because they were able to debunk some myth about their approach being bad, etc. In the end, push- and pull-based systems both have disadvantages, but the severity (of disadvantages) depends on your concrete use case.

With any monitoring system you will need to handle details such as:

In practice, you will probably do fine with either approach. And architecturally-speaking, you can mix&match the pull- with push-based approach. For instance, the Pushgateway is converting push to pull, and applications such as Telegraf can convert pull to push.

Prometheus’ pull-based approach does have two disadvantages (of category operational complexity) which I’d like to address:

By now, you might be wondering: if the Prometheus stack is designed to do observability of a large-scale distributed system (with potentially thousands of nodes and services), how does Prometheus itself scale, including its related components, such as Alertmanager? Clearly, running just a single instance of Prometheus and Alertmanager is dangerous. You would risk the system’s high availability (if the one server crashes, you’d lose observability completely), and risk the system’s performance (when Prometheus cannot keep up with collecting all that metrics data).

Interestingly, the Alertmanager offers an High-Availability-mode (where a gossip protocol between the Alertmanager instances exchanges information about notifications and silences), but Prometheus does not! From a performance standpoint, often case a single Prometheus is enough. Its implementation is very efficient, being able to scrape thousands of servers (where each server has thousands of metrics data streams). If you still choose to scale Prometheus horizontally, you simply run multiple Prometheus servers, which scrape data independently from each other. You should make all of your Alertmanager instances known to your Prometheus servers, so that they send the alerts to all of them. The gossip protocol of the Alertmanagers will make sure to deduplicate notifications.

If you operate multiple Prometheus servers, you don’t have to configure them all to scrape the exact same targets. This would only achieve high availability, but performance would still not suffice if you have many targets. Instead, you let different Prometheus servers scrape different targets, and then have yet another “leader” Prometheus who scrapes the other Prometheuses. This concept is called “federation”. As documented here, Prometheus has a /federate endpoint. You can configure a Prometheus to scrape other Prometheuses’ /federate endpoint. A typical use case is a 2-level hierarchy, where you have several Prometheus servers (e.g. one in each data center) on level 1, and one (or more, for HA) global or “leader” Prometheus servers on level 2, scraping the level 1 ones. The global Prometheus then lets you do calculations such as “how much global traffic did our application receive?”. See this article to find more about scaling and federation.

Finally, you need to solve the issue of scaling storage. Each Prometheus expects access to a fast storage system (often a local SSD, or some kind of fast NAS). Data is kept only for a short time period by default, such as two weeks, to keep the disk consumption manageable. If you want long-term metrics storage, the amount of data would grow beyond what typical disks could handle. Thus, you are stepping into the realm of distributed storage. There are solutions such as Thanos, Cortex and M3 which offer solutions for long-term storage, including load-balanced query endpoints. Take a look at the presentation “When Prometheus Can’t Take the Load Anymore” (video, slides) from May 2021 to learn about their differences.

The Prometheus stack is a complex system. In my opinion, separating the stack into multiple applications (where each one has a separate concern) has been a good approach. You will quickly get used to the way this affects configuration of the components, understanding which part of the configuration belongs into what file. The fact that you now have many (smaller) files (stored in version control) helps larger teams to split responsibilities, regarding who configures what.

, takes a look at basic concepts of the Prometheus stack in more detail, refining some of the concepts already introduced here.