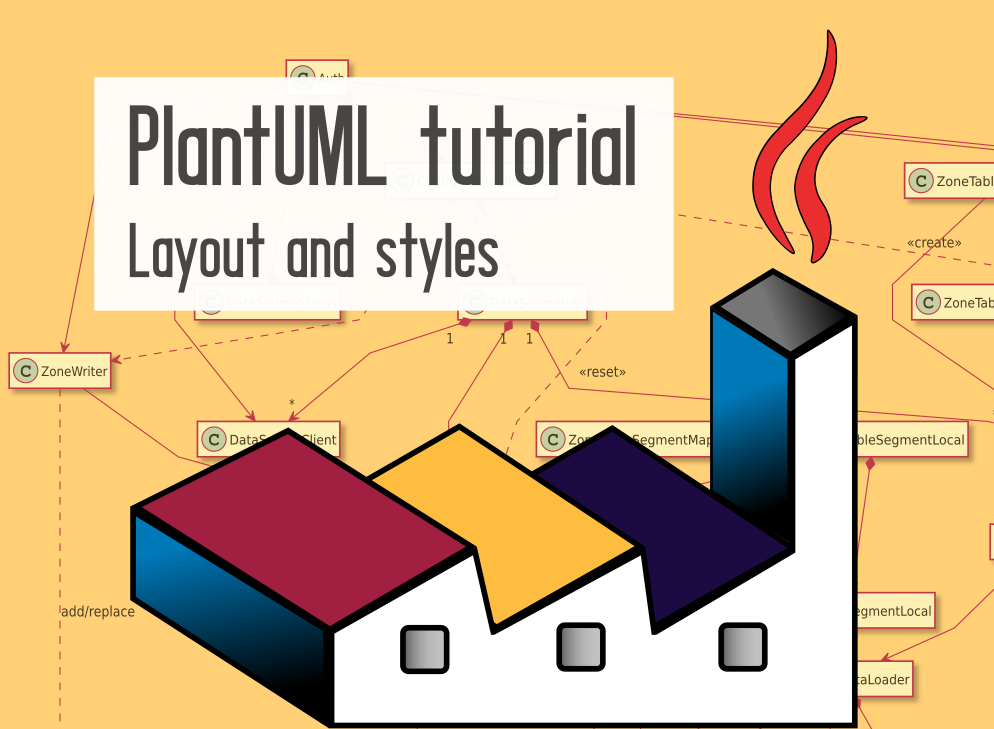 With PlantUML you can create diagrams as plain text code. PlantUML takes off the burden so that you don’t need to worry about the looks and layout of your diagram’s elements, by applying opinionated defaults. This article is both a PlantUML layout tutorial, which explains how you can customize the layout, and also explains how you can customize the styles, influencing how your elements look.

PlantUML is a Java-based tool that lets you express diagrams as code. As my introduction article explains, you can use PlantUML for any kind of UML diagram and beyond, including mind maps or Gantt charts.

While PlantUML does the “right thing” most of the time, sometimes you will need to tweak a few settings. Finding the right keywords is a chore at times, which is why I wrote this article to explain tricks for two of the most often needed customization options: layouting and customizing colors and other styling elements.

PlantUML takes care of your diagram layout, so that you don’t have to. Unfortunately, the layout produced by PlantUML is (very) sub-optimal in specific cases, or the arrangement of elements is simply not to your taste. This section presents several tricks you can use to tweak the layout. However, the authors of PlantUML advice you to use those sparingly.

Your diagram consists of one or more sets of connected elements (that is, the different sets themselves are not connected). For instance, imagine a diagram of six nodes (A, B, C, D, E, F) with two connected sets, e.g. set #1 somehow connects nodes A, B, and C with each other, and set #2 somehow connects D, E, and F.

For nodes within such a set, there is a default layout direction PlantUML uses, which is configurable. If you don’t configure anything, this is the top to bottom direction. This is why a statement such as A --> B produces an arrow going from top to bottom. You can change this default by adding the left to right direction statement near the top of your file.

Considering the different, disconnected sets, PlantUML will layout them in the direction perpendicular to the default flow direction (so, by default, from left to right), as illustrated by the following example:

There are a few subtle notions about defining connections that you should be aware of, so let’s take a look at the syntax:

If you use the left to right direction command, then explicitly specified directions (such as A -up- B) don’t do what you would expect. PlantUML applies such explicitly specified directions in a first stage, where they are still interpreted in the context of the default top to bottom direction. Only afterwards is the layout (mentally) rotated by 90°. Thus, if you used the left to right direction, and wanted A to be below B, you need to write A -left- B. If you wanted A to be left of B, instead of A -right- B you’d write A -down- B.

To force PlantUML to place a specific element above/below/left of/right of some other element, you can use invisible links. These are like normal connections, but are not drawn. The syntax is A -[hidden]left- B where left can be exchanged with any other direction, or its shortcut (e.g. l for left). The following example illustrates this:

By wrapping two or more elements in a together {...} block, you basically create an invisible box around those elements. In other words, no other element will come between those elements.

You should also try the example with single dash connectors (-) instead of -- (open example in editor). Observe what happens if you remove the together constraint.

Using !pragma ratio x where x is a floating point number, you can influence the width-to-height ratio.
Roughly, x = height/width.
For instance, !pragma ratio 2.0 will produce an image that is roughly twice as high as it is wide. There are two caveats you should be aware of:

For most diagram types (such as deployment, class, …) you can change the margin between elements using skinparam settings:

With skinparam padding x (x also being an integer > 0) you will increase the padding of every kind of element, so use it carefully, with small values.

PlantUML offers three mechanisms to customize colors and other styling-related things, such as margins, sizes, etc. These are:

The authors of PlantUML plan to replace skin parameters with the style sheet mechanism in the future. I personally like the style sheet approach better anyway. Let’s take a closer look at these three approaches!

You can create (blocks of) text that is part of an element (or connection) which is styled in various ways, influencing its color, size, font, etc. This can be done by using specific HTML-like tags (such as <color:red> or <b>) or the so-called Creole syntax, which is a light-weight markup language also used in other systems, slightly extended by PlantUML-specific syntax. You can of course also mix Creole and HTML. The official docs will serve you fine to understand the basics.

Ultimately, you have to go through the list of skin parameters and see which ones you need, digging through the different sources of documentation. Here are two interesting ones that caught my eye.

First, there is a Handwritten or monochrome look, which helps you achieve an “unfinished” kind of look, which is useful for preliminary, work-in-progress diagrams.

If you don’t like the default curved routing of connections in more complex diagrams, you can customize the linetype skinparam with values polyline or ortho, to customize how connections are routed:

Style sheets are extremely poorly documented in the official docs. I recommend looking at the plantuml.skin file and the post written on May 5, 2020 in this forum thread, to get started via examples.

Style sheets have a number of advantages over skin parameters:

Sometimes you want to apply a certain style only to a specific instance of an element, but not to other instances. For example, you might want a very specific arrow to be bold or have a different color, or want to highlight a few specific classes of your class diagram with a different background color.

To achieve this, you should first skim over the docs of the specific diagram type (e.g. class) that you are building, to find out what kinds of inline styling options there are. For instance, the class diagram docs mention that you can use a notation such as A -- B #line:red;text:red : "link text" to connect class A with B via a red line with red label text. As you can see, such a notation lets you modify a specific element of the diagram by putting the concrete styling inline, right next to it.

However, often the aspect you want to style is not available in such an inline way. For instance, how would you set the background color of a specific class? The trick is to use custom stereotypes for this, which are similar to stereotypes you might know from, say, class diagrams (e.g. <<uses>>). The general idea works like this:

The following concrete example illustrates how to perform these steps:

PlantUML is a tool that has grown over time and now has a huge amount of features. Not all of them are easy to understand, which is also due to the lacking documentation. While this sounds dire, it is not really a problem in practice. This article provided a lot of hints. With practice these thing will become effortless. I recommend that you build your own cheat sheet for syntax that solves specific problems (e.g. for layouting or colorization), to make you more effective in the long run. I’ve discussed cheat sheets in detail in this article.